24 Stop us if you’ve heard this one: “How do you entertain a bored pharaoh? You sail a boatload of young women dressed only in fishing nets down the Nile and urge him to go catch a fish.” Ba-da-bum. That, according to the Smithsonian, is one of the oldest jokes on record (we assume it was funnier in the original Egyptian). On NATIONAL TELL AN OLD JOKE DAY, challenge staff to do better: How many optometrists does it take to screw in a light bulb? (Answer: 1 … or 2? Or 1? Or 2?) It’s the middle of summer and a groan has to be better than a yawn.

1 Economist Thorstein Veblen laid out the rationale for things like a pair of $350 brand name sunglasses in the late 19th century: Just about all social classes strive to emulate the “conspicuous consumption” of the elite. But unlike say luxury SUVs, UV-blocking sunglasses have a higher purpose, protecting eyes from the sun’s harmful rays. Remind your customers of that during UV SAFETY MONTH. And if those same customers want to spend hundreds of dollars to look rich and famous, who are we to deny them?

2 At noon today, 2017 will be HALF OVER. Assess your first-half performance, and make a commitment to doing things better. Remember the words of the late Jim Rohn, one of the original big name motivational speakers: “Success is nothing more than a few simple disciplines, practiced every day; while failure is simply a few errors in judgment, repeated every day.”

3 The DOG DAYS are upon us, “when the sea boils, wine turns sour, dogs grow mad, and all creatures became languid with fevers and hysterics …” Yeah, it’s pretty muggy out there, and often pretty slow in the store. That’s no excuse for not having an attack plan for the summer months. Last year, Draisin Vision in Charleston, SC, took inspiration from the Dog Days to partner with Pet Helpers and the Charleston Animal Society to donate a portion of every exam fee. They also held a contest inviting patients to post pictures of their dogs in sunglasses on their Facebook page, with the winning dog getting a free pair of Doggles and their owner a free pair of sunnies.

18 Hunter S. Thompson had a different view of the world: skeptical, dark, often distorted by a cocktail of drugs and usually seen through his Kalichrome Shooter Aviators from Ray-Ban. “I seldom wear really dark sunglasses,” he told Playboy in his last interview. “I’ve found that if people can see my eyes through the lenses it’s more comfortable. I try not to have my costume be a problem for me or other people.” On the 80TH ANNIVERSARY of his birth, celebrate that honesty with a Facebook post and a quote. Our favorite: “Anything that gets your blood racing is probably worth doing.”

July 12 Sports Cliché Week. Take it one game at a time, leave nothing in the locker room, and have some fun spouting inspirational nonsense.

July 17 National Ice Cream Day. Team up with a local parlor for a promotion: Sunglasses and Sundaes. The perfect summer combination.

July 30 National Dance Day. Offer a discount to anyone brave enough to enter your store dancing. 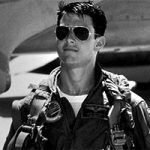 July 3, 1962: In 1976, if you’d said that 14-year-old seminary student Thomas Cruise Mapother IV would soon be one of the world’s biggest movie stars, most people would have asked what you were smoking … Just shows what a good pair of sunglasses can do. And what a star can do for a brand. In Risky Business, Cruise basically saved Wayfarers, which were about to be phased out, and in Top Gun, he made Aviators cool again. At 55, Cruise is still selling sunglasses. Most recently, L.G.R.’s Tangeri aviators in Mission: Impossible — Rogue Nation.

Take a Whiff of Your Office and More June To-Dos