IN PART TWO of INVISION’s COVID-19 Impact Survey, we asked ECP biz owners which channels they’ve been using to stay top of mind in their communities and with their clients. Not surprisingly, social media led the way, with more than 68 percent of respondents saying they were keeping their accounts fresh and ticking over with information. (Respondents were allowed to select all channels that apply.)

Somewhat more surprising, perhaps, is that social media was the only channel being regularly used by more than half of respondents. About 45 percent said they were working the phones, and 38 percent were sending out more emails. Post-COVID-19, rest assured we’ll be following up to see how the scant 5 percent of respondents who said they’re using this time to ramp up their e-commerce channels have benefited from that decision. 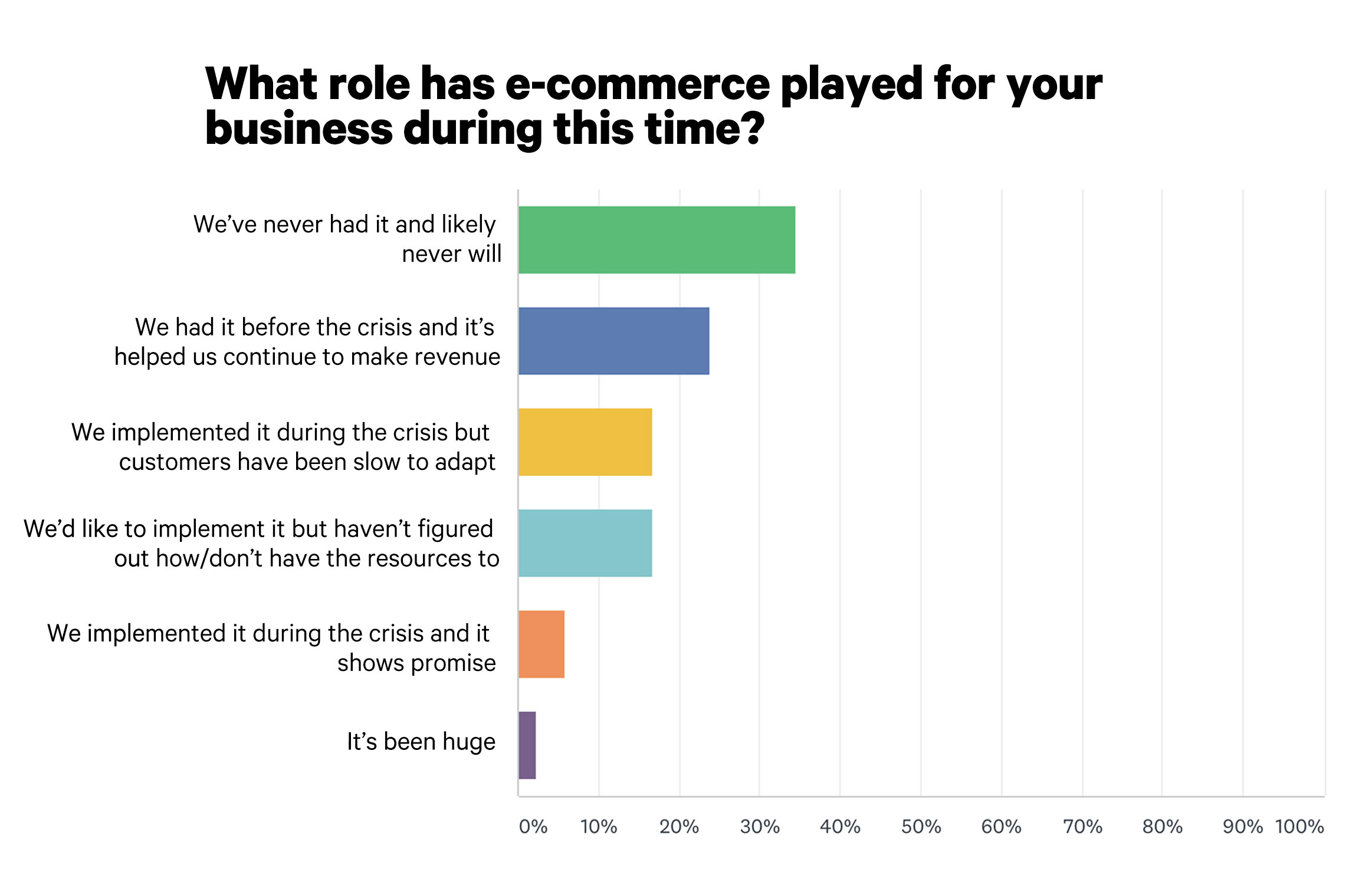 Speaking of which, it seems that months into the crisis, not even COVID-19 can shake the idea among many business owners that online commerce is not a friend to independent optical retail. Asked “What role has e-commerce played for your business during this time?” the largest proportion — 35 percent — said they’ve “never had it and likely never will.” On the other hand, the fact that fully a quarter of respondents chose “We had it before the crisis and it’s helped us continue to make revenue” suggests that those who went into this mess with an online sales platform in place are benefiting.

For those who have tried to switch gears and implement e-commerce since COVID-19 hit, more often than not the experiment has been a frustrating one. Some 17 percent of our respondents said they’d tried to bring it in but customers weren’t really biting. Five percent said they’d launched e-commerce in the past few months and that it was showing some promise. About 17 percent told us they’d like to get it going but lack the resources or know-how, and a mere 2 percent said e-commerce has been “huge” for them.

This mix of significant skepticism amid quieter indications of a willingness to experiment was repeated when we asked ECPs what role telehealth was playing in their business during this time (though overall the response could be described as more positive than it was when we asked about e-commerce). Again, the largest group, about 28 percent, said they “never had and likely never will.” Perhaps reflecting the relative novelty of this technology, a far smaller group (about 3 percent) said they’d deployed it pre-crisis and that it was helping them to treat patients. Some 15 percent said they’d brought it in since the pandemic began and it was showing promise, about 14 percent said they’d done the same but patients were slow to respond, and a modest 5 percent said it had been “huge” for them.

ECP Biz Owners Struggle to Make Productive Use of Downtime