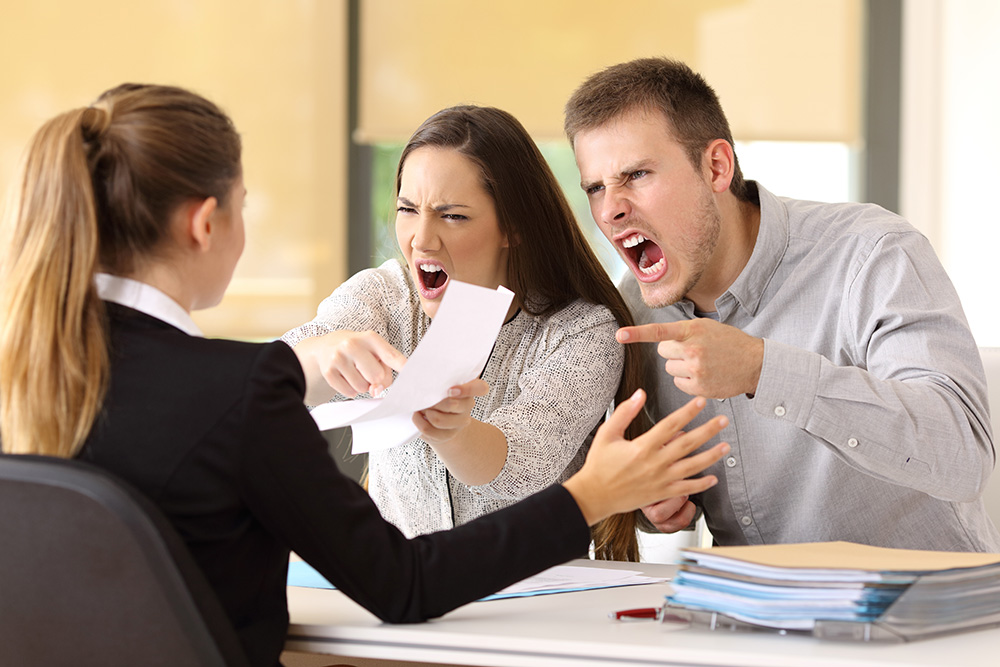 Ever come across one of those clients who likes to threaten to sue you whenever they are not happy? How do you handle them?

No brainer, says Dr. MyHanh Dang of Gateway Eye Associates in Pittsburgh, PA. “As soon as someone introduces a threat of unjustified legal action, my tolerance level goes to zero. At that point, they get a full refund, a copy of their Rx, and I terminate our relationship, explaining that the doctor-patient trust has been compromised. Then I wish them the best of luck with another eyecare place that they trust.” At that point, says Dang, “often a reasonable person will realize their actions and apologize. At that point, we can move forward positively. ”

Every once in a while, I catch my staff saying things to customers that make me cringe. What are some of the key no-nos?

I’ve got two candidates for my front office job — one with strong skills, but one with a stronger attitude. Who’s a better bet?

Attitude wins every time, according to Tim Connor, author and sales trainer from Connor Resource Group. “It is easier to teach new employees skills than it is to change their attitudes. Attitudes are developed over a lifetime, and neither you nor I are going to change them in the short time this employee might be with us. By the same token, hire a great attitude, and I guarantee this employee will push you, make you look good, and before you know it they will outgrow the position and want, as well as need, to move on. Everyone wins in the process.” Sooner or later, says Connor, most people with indifferent attitudes, despite their skills, become untrainable. “Avoiding a hiring mistake can save you lots of grief, wasted training time, and negative impact on other employees and or customers. ”

What can you do when you get a patient who smells really bad?

Tough it out, say the doctors on ODs on Facebook. But subtle defensive maneuvers can help. One doctor keeps a bit of Vicks Vapor Rub handy and will discreetly smear a little bit under his nose. For really heavy-duty cases, tell the client you have a cold and will need to wear a mask.

What’s a good general rule of thumb for saying a customer’s name during a sales presentation?

Scott Ginsberg, an author and speaker also known as “That Guy With the Name-tag,” weighed in on the subject. “People enjoy hearing their names more than any word in the dictionary. But there comes a point where customers are thinking to themselves “All right, I got it. You know my name. That’s enough!” Ginsberg imagines what goes on in a customer’s head as a salesperson says his name during a short (seven-minute) transaction:

Nada: “They didn’t even use my name once. I don’t feel valued.”

Twice: “Whoa! Two times! This salesman has a great memory. Now that’s what I call service!”

Three times: “All right (mild chuckle). I got it. You know my name. Thank you very much.”

Four times: “No, seriously, you don’t have to keep using my name. The first two times were enough.”

Five times: “This is ridiculous. And annoying. I no longer believe you are sincere. And now I’ve become uncomfortable. Please go away.”

One member of my staff is a smart guy — but he’s not exactly “personality-plus” and he often speaks in this numbing monotone that puts people to sleep. How can we jazz up his presentation?

Facebook vs. Social Media Marketing and More Questions for January

What Do You Do When a Patient Just Keeps Talking? And Other Questions You’re Asking