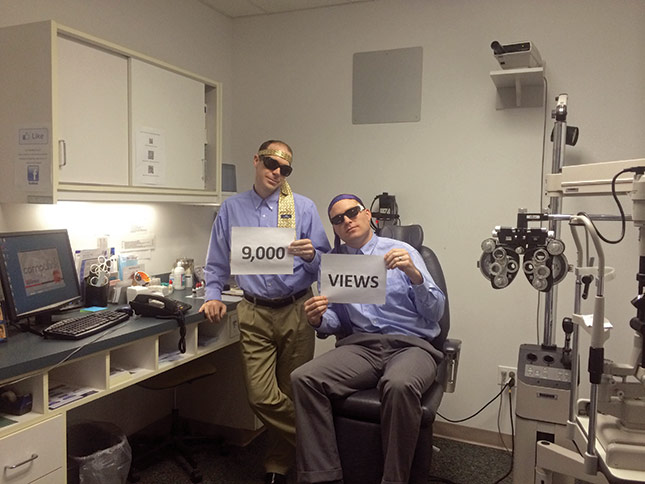 BEST OF THE BEST: ODs make eye-themed music videos to have fun, boost volume at practice

What do Harry Potter, the pope and “every animal in the San Diego Zoo” have in common? They all wear eyeglasses from Johnson Optometric Associates — or at least that’s what Drs. Andrew May and Barrett Martin claim in Eyes Eyes Baby, a goofy parody of the Vanilla Ice classic and one of a growing catalog of business-building YouTube videos the duo have made since teaming up at the practice last year.

May grew up playing and singing music in the school band and choir, as well as in high school rock bands. He started making “Weird Al”-style eye-related music parodies while a student at the University of Alabama at Birmingham School of Optometry. He even gave his classmates a CD of his eye-tunes for graduation. May put the hobby aside for a time when he joined Johnson Optometric after graduation in 2009, but when fellow UAB alum Martin started at the practice in 2013, they began to collaborate.

The videos are a new marketing channel for Johnson Optometric, which was begun by Dr. Al Johnson in 1950. Johnson’s son, Robert, now leads the five-doctor practice, which has locations in the Raleigh-area towns of Garner and Fuquay-Varina, NC. “Dr. Bob” likes the addition to Johnson Optometric’s marketing mix. “The response has been overwhelming and patients have commented on how much fun it seems to be to work here,” he says.

So far, May and Martin have covered Tom Petty’s Freefallin’ (as Nearsighted); Let It Go from the movie Frozen (as Let ‘Em Go, a call for extreme myopes to choose contact lenses over thick glasses); and a medley of songs inspired by that great Broadway musical, Les Miser-Eyes. Their biggest hit by far has been Eyes Eyes Baby, with nearly 10,000 views as of mid-June. (See it here: invmag.us/7144) Coming soon: the History of Eye Tunes, an ambitious mash-up video of seemingly every rock song ever written about eyes.

May usually adapts the lyrics for each song, then he and Martin shoot the videos over lunch and after work, sometimes enlisting colleagues in the fun. May used to perform and record all the music, but on recent projects, they’ve used karaoke tracks, a big time-saver. May does post-production on his iPad, using the Apple programs Garage Band and iMovie.

It takes anywhere from six hours (for Let ’Em Go) to more than 20 hours (Eyes Eyes Baby) to complete a production. Each video has contact information for Johnson Optometric, and the songs — or a graphic afterward — invite people to call for an appointment.

May says the duo plan to do educational videos to augment the parodies. “I routinely hand out our YouTube channel address to patients, mostly because many of them have heard or seen that we are making these fun videos. That will increase when I can point them to the channel to get more information or better explanations for their eye conditions,” he adds.

While May and Martin say it’s hard to track how many patients the practice has gained via the videos, the clips help people make a connection with Johnson Optometric and put faces to the names of its two youngest doctors. “People at the gas station say, ‘I saw your video.’ I don’t even know them,” says May.

The videos have helped introduce Martin, the practice’s newest doctor, to longtime patients so they’re more comfortable seeing him if their regular doc isn’t available. Johnson says the practice has also had more applications and resumes as a result of the YouTube presence.

Set up a YouTube page for your business. Include an attractive cover photo and tag your videos with keywords that will help search engine optimization. Promote via your website and on social media.

May and Martin advise aspiring eye doc video stars to be creative. “We already have all the good ideas,” May teases, but he allows there are plenty of songs that lend themselves to new interpretations.

“Make the lyrics general so the average person can say, ‘Oh yeah, that happens to me when I go to an eye doctor.’ Don’t get super technical,” says Martin.

Once your videos get a following, help fans get excited about what’s to come. May and Martin are now staging lip-sync battles between each other and for their social media followers (who can compete to win a $50 gift card).

See the Johnson Optometric videos and get inspired at youtube.com/user/johnsoneye.

Best of the Best: New Hope

RestoringVision is Fundraising on Giving Tuesday