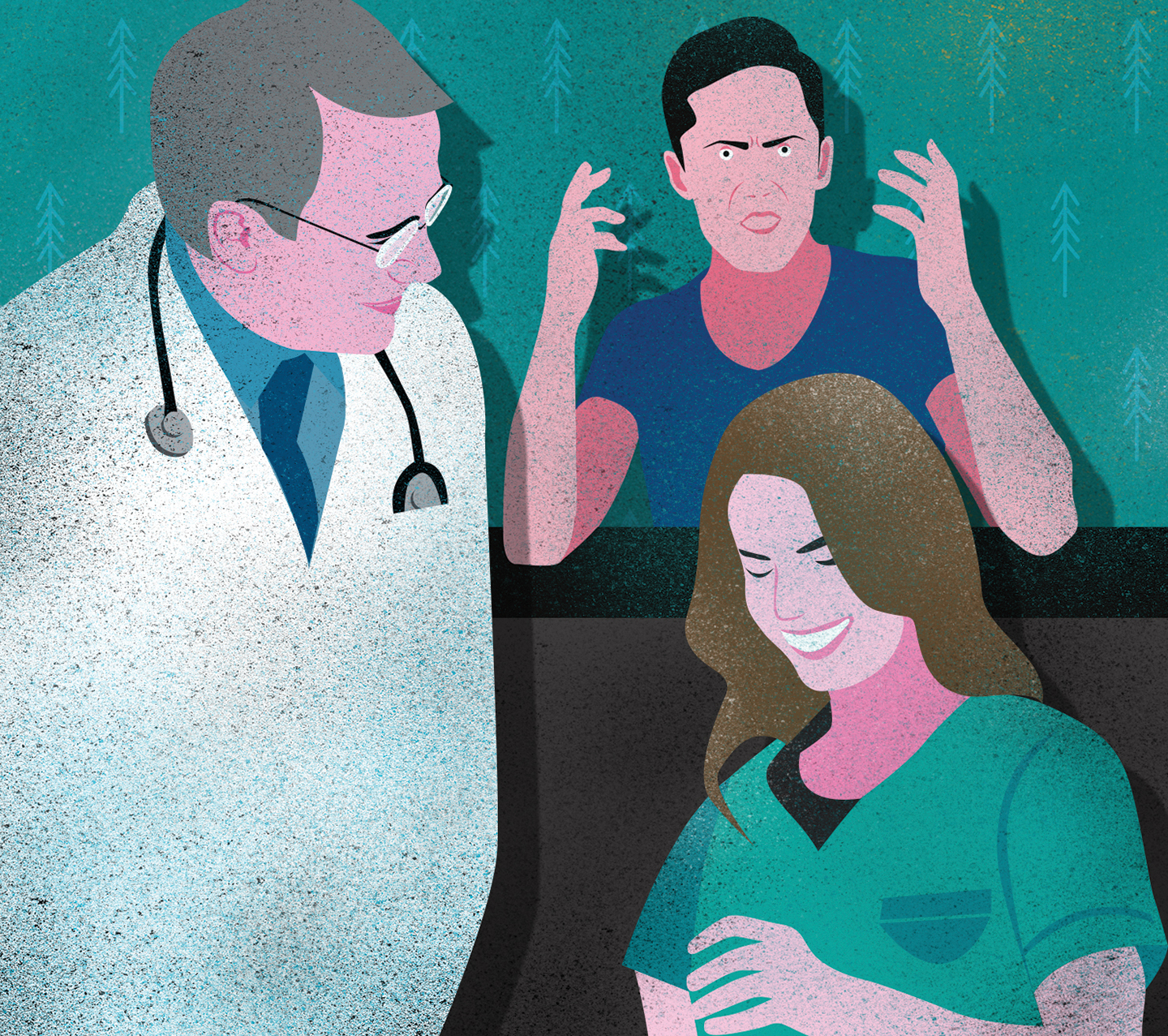 FLYNN OPTOMETRY ASSOCIATES was a three-doctor practice in Vermont, just over an hour south of Burlington. Dr. Flynn ran a medical-based practice and prided himself on being sent challenging case referrals from fellow optometrists.

Dr. Flynn owned the practice, but had recently come to accept that delegating many tasks would increase his quality of life; he was happiest in an exam room with patients. Greg, the practice’s first real manager, was new to optometry but came highly recommended from Dr. Flynn’s sister, who was a dentist in the practice Greg had managed for years.

Greg found there were similarities between the specialties, and worked hard to get acclimated. He liked to develop relationships with staff and patients, and met many managerial challenges using his warm, earnest personality. Within his first month, Greg hired Brandy, an experienced optometric technician. She was a Certified Paraoptometric through the AOA and had relocated from out of state, where she had worked for a decade in a high-volume practice.

Brandy brought a fresh eye, and immediately began making improvement suggestions to Dr. Flynn. She convinced him to let her scribe, which improved output. Then she pushed him to try out a few electronic medical records systems. She even developed a checklist for her fellow technicians, to cut down on common errors. Greg was initially impressed with Brandy’s task-based attitude, but grew to find her aggressive, distant and serious. Dr. Flynn, on the other hand, liked working with Brandy so much that he began favoring her on projects.

One busy afternoon Greg took a call from a well-known EMR software company.

“I’m calling for Brandy. Is she available?” asked the woman.

“She’s with a patient. I’m the office manager; may I ask what this is regarding?” Greg replied.

“Dr. Flynn asked me to call Brandy to set up a time to schedule software implementation,” she said.

“Oh,” said Greg, bewildered. “I’ll be sure to ask her to call you back,” he said, hanging up. Greg immediately sought out Dr. Flynn, who was in the break room. “I just got a call that we are bringing in electronic health records?” blurted Greg.

Dr. Flynn looked up from his lunch. “I think it’s time,” he said, but could feel Greg’s incredulity.

“Why am I just hearing about this now?” Greg asked.

Dr. Flynn leaned back in his chair and said, “This was going to be the topic of our meeting tomorrow — Brandy knows a lot about this software. I want her to be the point-of-contact. You’ve done a great job learning the ropes, but you’re not where I need you to be for this project.”

“This sends the wrong message to the staff — and to me,” said Greg bitterly.

“I’m sorry you feel that way, Greg, but this really isn’t something to get upset about,” said Dr. Flynn, resuming his lunch.

A business owner needs to look at the bottom line and the end result. Each employee fills a niche and as such needs to be valued in their sphere. If an employee is feeling out of sorts, then an honest discussion with the owner is appropriate, but it should be based on information sharing, not airing emotions. Dr. Flynn is looking out for the office, and his tech seems to have skills, knowledge and abilities that can help. The office manager has his own realm and should not feel undermined. It would behoove the doctor not to let Greg find out about such things the way he did here, but all employees need to be able to back up and see the bigger picture, and to understand that the EMR will actually be good for all employees in the end.

For many business owners, establishing a “chain of command” is difficult. Dr. Flynn hired a well-respected office manager who went “all in,” learning a new industry and a new practice. He also hired a well-qualified paraoptometric. While both staff members have established credentials and experience, Dr. Flynn doesn’t appear to have established a hierarchy for practice operations and now risks losing his office manager and/or his paraoptometric. The ideal solution would be to meet with Greg and re-establish his status, then meet with Brandy and explain how his team is expected to perform: together, as a team of experts.

Don’t limit Brandy. Greg sounds great. High five if you have two racehorses in your practice; just make sure you’re bringing them both along. With things changing quickly, Dr. Flynn needs to communicate clearly with each of them, and with the rest of the staff. If Greg is as competent as he seems, he needs to rise to the challenge and manage this go-getter employee. Dr. Flynn needs to recognize that there needs to be one manager, and many good employees.

1. The office manager’s job is to promote growth, not to limit his team’s ability to grow. It appears Greg’s need to control the situation stems from his desire to lead based on his position alone — what John Maxwell calls the “lowest level of leadership.” The highest level of leadership is leading from influence. That takes time and involvement with your team.

2. Yes, Dr. Flynn, while not gravely in the wrong, has left a leader in his organization out of the loop. He should have given the information to Greg early in the process, whether to get his input or to let him know “this is the direction we are going in.” Dr. Flynn is the CEO here and is fully within his rights to choose leaders as he sees fit.

There is no reason to limit Brandy’s growth. Dr. Flynn has a couple of choices here. He could make Brandy and Greg both managers with different responsibilities or he could have Brandy answer directly to Greg. There should be better comunication between the three of them. Dr.Flynn should meet with the two of them and set expectations for all three of them to follow. As it played out, Greg felt threatened by being left out of the EMR conversation and he should have been included. Greg should show that he is flexible and will continue to find ways to help the practice continue to succeed with Brandy’s input and help.

The doctor should have had a meeting with his manager to discuss EHR. Then he could have Brandy present her experience with EHR. He undercut his manager.

Dr. Flynn should have kept Greg in the loop. He did nothing wrong by asking Brandy to lead the project. We want to develop leaders amongst all employees, not just the “man with the title”. Leadership is not a title and it is important that we educate our team and give them opportunities to learn and grow. This is a great opportunity for Greg to learn and grow. He should be thoroughly involved in the project and soak up as much information as possible along the way. Greg’s value will be seen in his willingness to learn from others. Greg must acknowledge his own limitations and be willing to accept help from others. Not knowing is not weakness, and Greg must understand that.

1. It is wrong to leave Greg out of the loop. If he is the manager, he should be having regular meetings with the doctor where the doctor should be discussing his interests. By keeping Greg in the loop, it does not change anything for Brandy. She could still be a part and have input.

2. Dr. Flynn has definitely done something wrong. He devalued Greg in front of his entire team. Success requires a united front.

3. If I were Greg, I would insist on being a part of the meeting with the EMR team. I would make sure that I was where I needed to be to implement the software to my team. I would prove Dr. Flynn wrong. I would work with Brandy in a positive way.

I think that Greg should have a conversation with Dr. Flynn and explain the mixed message that the team receives when all parties are not on the same page. I would encourage Greg to not bring the emotional slight that he feels into the conversation.

A Bad Online Prescription Induces Prism with the Correct Rx, What’s an Optician to Do for Her Frustrated Patient?

A Doctor Doesn’t Want to Follow the Rules, How Liable is the Insurance Biller?

A 21st Century Solution for Presbyopia

Most businesses would run much more smoothly if bo

Transform your multi-office phone system into a re

Founded in 2016 in Portland, OR, ALEXANDROS EYEWEA

“The circulatory system of the office.”  “

Inspired by Coach’s distinct approach to its aut

VEE is Back! Or will be in less than a month … a