Not Your
Ordinary Optical

Jim Wojcicki, owner of the UnOptical in San Diego, doesn’t agree with the notion that you can’t be all things to all people. “I take that as a challenge,” he says. 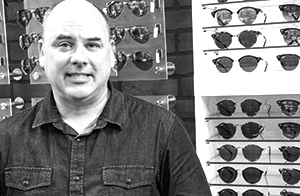 The UnOptical snags shoppers with flirtatious advertisements for the shop’s “Big Package” and “Big Rack” deals. It’s sexy, savvy marketing, but Wojcicki has learned that people check out a store for one reason and become repeat customers for another.

The business thrives by having 4,000 frames in stock, everything from the world’s most popular eyewear to edgy independents, plus an onsite lab and optometry office. “If you don’t have it, you can’t sell it,” Wojcicki says, adding that if he ran a shoe store, “I’d have a ton of shoes.”

Wise words from someone who had already been in the eyewear business for 21 years before he launched the UnOptical.

Wojcicki began as a LensCrafters sales associate while in college, eventually serving as a regional director of operations in charge of nearly 30 stores responsible for $43 million in sales.

But when the recession hit in 2008 and Luxottica laid off many managers, Wojcicki’s severance pay helped him open the UnOptical two years later. He’d learned a lot about eyewear retail, especially as a regional manager for Sunglass Hut. But he quickly learned what he didn’t know, too. In the chain environment, many buying decisions had been made higher up. He says it was “eye-opening” and “freeing” to learn about more ways he could help people see better.

The UnOptical has a two-level store on the corner of a busy street in San Diego’s Uptown area. (Wojcicki says he pays a lot in rent and it’s worth it: “That’s my marketing.”)  As soon as people come in the door, they see front-line frames arranged not by brand but by lifestyle categories including Classics, Techno, Funk, Sporty and Runway.

Wojcicki says the worst thing he can hear from a customer is “You have a lot, but you don’t have a lot for me.” Merchandising by lifestyle helps people see at a glance what the UnOptical offers in frames they might like. “I don’t want to make it a three-hour mission for them,” he adds.

The main showroom also includes about 650 frames in a “Big Package” section, where complete pairs go for $113 for single vision with plastic lenses, $199 for polycarbonate lenses and $299 for freeform progressives with AR coating. The UnOptical hawks this deal with a knowing wink and taglines like “Everyone loves the Big Package.” The selection includes popular lines the UnOptical stocks all the time including Coach, Kate Spade and Scott Harris.

Also available: the “Big Rack,” with single vision and progressive pairs complete at $99 and $195, respectively. Wojcicki says these pairs are either fun, less expensive lines like Polaroid or designer frames that he’s phasing out. “Big Rack” sounds more fun than “clearance,” and it offers a price point that helps the UnOptical compete with Warby Parker and online frame merchants.

The second floor was once home to discontinued lines sold at deep discounts. “I was bringing in the people who wanted the cheapest thing in town,” Wojcicki says, but he sensed they wouldn’t come back. Last summer, he converted the top floor to a Ray-Ban store with 720 frames, “just about everything they make.”

“A lot of people are anti-Ray-Ban or anti-Luxottica. I look at it as I’m a businessman and it’s my number one brand, so how do I get more of this into my store?” Ray-Ban sales are stronger than ever, but with it off the main floor, more people are discovering and buying other brands like TOMS and Maui Jim.

“Having licensed and independent brands exposes the consumer to both,” he says. “I have a responsibility to my customers and [to] have what they want or need.” Sometimes, it’s a Masunaga, but sometimes, it’s an Armani Exchange with a pop of red or a Calvin Klein in a clear color – or all three. “I don’t like being limited,” Wojcicki adds. “So I don’t want to limit my customers.” 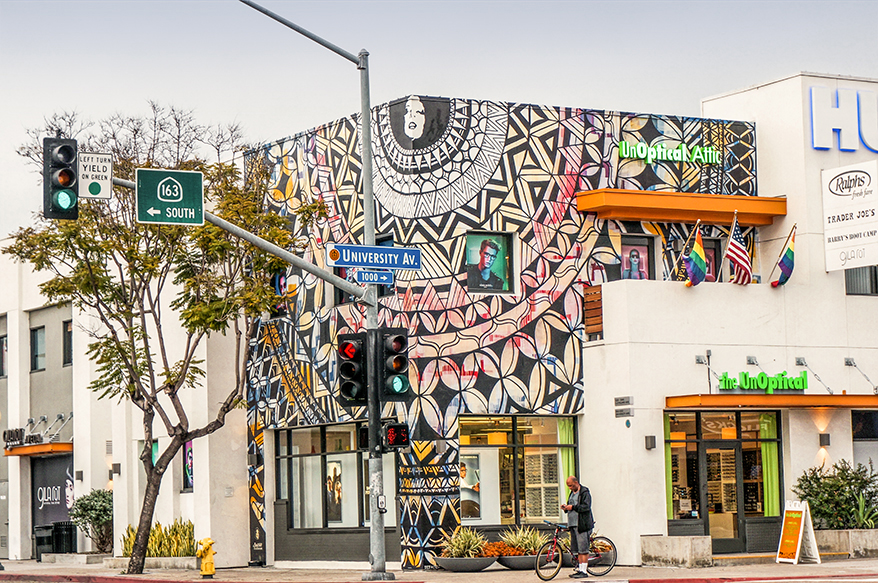 The UnOptical has a two-level store on the corner of a busy street in San Diego’s Uptown area.

Quantity and quality. Although the UnOptical doesn’t accept vision plans, Wojcicki says the shop’s volume means he can negotiate with labs and vendors and pass along savings. He adds that he doesn’t know how ECPs who take insurance make any money.

Package store. The UnOptical has a sidewalk sandwich board sign that says, “Check Out the Big Package.” People stop, pose for pictures with it and sometimes post them online. “You have to get people to stop in front of your store,” he says. A water bowl for dogs serves the same purpose: “The dog will stop every single day, and then the humans stop and look in the store.”

Social fans. The UnOptical hasn’t run print ads for about four years, but it loves Facebook ads. Wojcicki calls them “super cheap, super easy to do and super fun,” and he tweaks ads often to see what pulls best. He also gives $50 to staff members who are mentioned by name in a Yelp review, because it shows they’ve created a connection with the customer.

Make lemonade. Through special sales of sunglasses donated by Marchon, the UnOptical has raised more than $83,000 over six years for Alex’s Lemonade Stand, which generates funds for pediatric cancer research.

Wait for it. For people who have their eyes on a front-line frame that’s out of their price range, the annual “Addicted to Spex” sale — held three weeks in the fall — is a big draw, with 40 percent off complete pairs that aren’t available via the package deals.

Working in tandem with onsite optometrist Dr. Todd Hebert, the UnOptical strives to always say yes to the customer. Although the store does about half its lab work in-house (with 10,000 lenses in stock), more complex jobs are sent out. When things go wrong or an order is inordinately delayed, Wojcicki often asks people to pick out another pair free of charge. “That usually stops them in their tracks,” he says. “A lot of times they’ll say, ‘No, no, you don’t have to do that,’ and I’ll say ‘No, I want to.’ The cost really isn’t that much, but if you lose a customer or someone bad-mouths you, that’s a bigger cost.”

This article originally appeared in the March 2017 edition of INVISION.

🦸 Opticians Are Your Optical Selling Superheroes

🏆 Save time, increase capture rate, maximize your EHR data and website with a seamless optical eCommerce plug-in that keeps patients buying from YOU 🎯 Now through August 31st when you complete a 15 min demo receive a $45 Target® gift card. Book your demo here.

Transitions Optical Hosts A Day of Education in November

If We Waited Until We’re Ready, We’d Never Get Anything Done

Wisconsin Man Charged with Practicing Optometry with No License