Down to a Fine Art

A Memphis couple built an optometric practice and eyewear boutique that reflects and enriches the vital, art-loving neighborhood they grew up in.

Eclectic Eye was born out of husband-and-wife team Robbie Johnson Weinberg and Dr. Michael Weinberg’s dream to establish a viable, engaging and artistic business in Midtown Memphis — the community in which they grew up, went to high school and first got to know each other — and where they had long hoped “to live, work and play.”

Midtown is known for its ethnic, economic and architectural diversity, thriving art scene and established LGBTQ community. According to Johnson Weinberg, however, it is still recovering from the effects of “white flight” experienced in the 1970s and ’80s after the murder of Dr. Martin Luther King Jr. and generations of Jim Crow racial oppression. By the late 1990s, after decades of depopulation, the neighborhood was sorely underserved. “We wanted to be a part of the solution by being in the city, in the community,” says Johnson Weinberg. In a way, they were hoping for a personal rebirth to match the revitalization they wanted to see in the community. At the time, they were both hustling in jobs for other people and beginning to feel trapped.

“We considered moving out of town briefly but eventually decided that what we wanted, most of all, was to open our own eyecare and eyewear boutique in our beloved Midtown community … We honestly believed that if we put a business in Midtown, people would support us.” They were right. “With our youth, naivety and lots of enthusiasm we threw open the doors in October 2002 and blew past our first-year projections within the first three months.”

Eclectic Eye fits in effortlessly with many of the mid-century businesses on Midtown’s Cooper Street, which has long been a primary artery connecting affluent, growing communities with all the city’s resources. “We wanted to be sensitive to the varied architecture and the activated, walkable community it once was and be a part of its return.” That process wasn’t a simple one, however. The location itself was found through sheer perseverance. The real estate broker they originally chose wasn’t comfortable with their vision; he simply didn’t believe Midtown was sustainable for the level of investment they wanted. “Back in the late 1990s,” recalls Johnson Weinberg, “Midtown was not pleasing from an economic or aesthetic standpoint.” In an era whose aspirations were characterized by big box, suburban living, “moving back into the urban core was an anomaly.” But after months of searching they found a new broker who was developing the space that eventually became Eclectic Eye.

Opening Eclectic Eye was the realization of Robbie Johnson Weinberg and Dr. Michael Weinberg’s dream ‘to live, work and play’ in Midtown Memphis.

Eclectic Eye’s design expertly brings the outside into the store with large windows taking up two whole walls of the dispensary. Inside the space feels vast but approachable, always focusing on the eyewear. A large acrylic tower in the center houses the pre-test center. From here, custom wooden work areas run for approximately 20 feet, mirroring the tower and its dropped ceiling shape. The store’s 1,200-piece collection of unique eyewear is showcased in custom glass and wood boxes that are variously fitted into the windows, lining the walls and hanging from the ceiling. Floating, suspended custom cabinetry provides storage for cases, books, cloths and other items.

Johnson Weinberg describes the store’s feel as “modern and industrial with homage to the mid-century style that’s all the rage today.” Flooded with natural light, the interior’s materials are primarily glass, stainless, aluminum and acrylic with warm wood tones for furnishings. A high, exposed-ductwork ceiling rises 14 feet above a richly textured, grey concrete floor. The frames themselves are displayed by brand. “To us, each brand tells its own unique story which must fit into the overall narrative of our story,” she says.

Over the past three years Eclectic Eye has put particular effort into its online presence, and has been gratified to see its follower numbers grow consistently across all channels, generating strong reviews. Johnson Weinberg acknowledges this is a never-ending process and credits the PR and advertising team at Inferno for creating a consistent brand message across platforms. The need for content challenges her to keep coming up with fresh ways to market the business, she says.

As they don’t take any insurance, Eclectic Eye is able to make it a policy to give patients one hour each with their doctor. “The doctors have time to listen to them, talk with them about their vision and their lifestyle, and maybe even have time to hear about their latest travel excitement or a kid’s escapade. They truly get to know their patients,” says Johnson Weinberg. A core goal of the practice has always been to provide the most comprehensive exam possible. To this end, they are always adding new technology. Exams include everything from taking blood pressure and obtaining an extensive family history to having their own OCT and visual field machines, which are used on each patient.

Eclectic Eye has its own lab and Dr. Weinberg is somewhat unique as an OD, as he grew up working in his dad’s lab. “That’s the other side of his passion,” says Johnson Weinberg. “He loves the process of understanding how that extremely challenging prescription might be designed to fit in an exceptionally unique frame.” She adds that her husband has worked hard to train their current lab team, as they view the lab itself as being equally important to their brand.

Stirling Barrett: Eclectic Eye’s brand brings together design, style, art and eyewear under one roof and with a purposeful, clear vision. Their community focus is refreshing and they lead with a commitment to customer hospitality.

Leigh and Todd Rogers Berberian: Now this is a contender!

Beverly Suliteanu: From the onset, there was a clear vision of the type of business Michael and Robbie wanted to build and they have succeeded in building a thriving, caring business that has stayed true to their mission and core values. Their love and commitment to the Memphis art scene, and to Memphis itself, is apparent. All of their initiatives speak to their core value of strengthening their community and building their team. 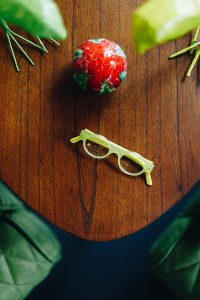 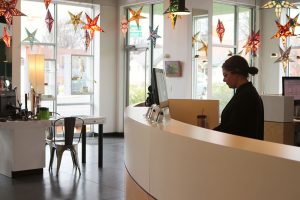 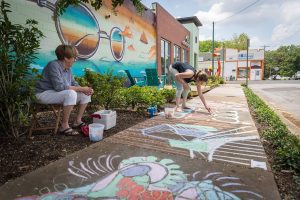 1 IN-DISPENSABLE. Patients are always set up for dispensing appointments with the team member they worked with originally. They receive a reminder text similar to those for doctor’s appointments. “We value the time for all of our staff and their expertise is scheduled accordingly,” says Johnson Weinberg.

2 TESTING TIMES. To boost team performance, all staff participate in Enneagram personality testing, a process that Johnson Weinberg admits “requires some deep diving.” She adds: “It’s been an awakening and continues to unfold.”

5 OUT AND ABOUT. In early 2018, Johnson Weinberg gave staff a Saturday off to participate in the September Memphis Gay Pride parade. She donated the day, the materials, the costuming, and whatever else they needed, and they designed and built a float and costumes. “They worked with each other outside of work to make it happen. It was a magical experience to watch it all come together!”

From its inception, Eclectic Eye was designed to host art shows. The store has hosted over 120 of them in the past 17 years. “This is one way we give back to the community,” says Johnson Weinberg. “In addition to providing our space, Eclectic Eye takes care of all of the event planning, advertising, PR, food, drinks and staffing of their event. In turn, a local artist gets to showcase their art to a whole new group of people for 7-8 weeks a year.” Eclectic Eye sees its independent eyewear designers as artists, and each frame as wearable art. So, showcasing local artists is a natural next step. The shows are fully dedicated to supporting artists (the Weinbergs don’t take a commission) and are separate from the store’s trunk shows. “We do, occasionally, sell a frame or book an eye exam, but that is the exception. The art is then on display until the next art show,” she says.

Related Topics:eyecare businesses in Tennessee
click to Comment(Comment)
Next Part

After 55 Years in Business, This State-of-the-Art Tulsa Optical Shop Knows How to Offer Something for Everyone