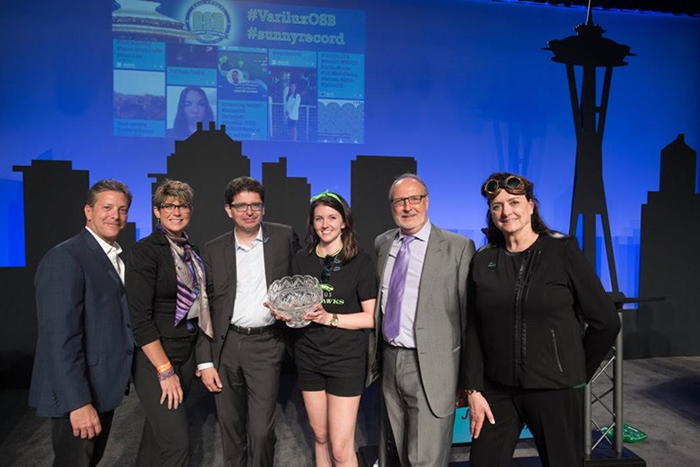 (Press Release) Essilor of America once again pulled out all of the stops to celebrate the 24th anniversary of the ever-popular Varilux Optometry Student Bowl, held at this year’s Optometry’s Meeting in Seattle.

Contestants, students from all schools and colleges of optometry, answered optometry-related questions while their fellow classmates energetically cheered them on wearing war paint, school colors and displaying brightly-colored banners.

In addition to bragging rights, the winning school, Pennsylvania College of Optometry, took home $1,000 and the coveted crystal trophy.

The winning question: “You are performing retinoscopy on a patient seated behind the phoropter. Your working distance is 50 cm, and you obtain the following results:

What is the distance Rx for both eyes written in minus cylinder spectacle Rx convention?”

This year’s competition drew well over 1,500 students, practitioners and staff.

Last year’s Spirit Award winner, The Massachusetts College of Pharmacy and Health Science School of Optometry, created an entertaining football themed video to detail the rules of the competition, which is available for viewing at YouTube.com/VariluxSuperBowl.

The Seattle Seahawks drumline, The Blue Thunder, entertained the crowd and helped introduce the contestants. Pacific University was chosen as this year’s Spirit Award winner, which will provide them with the honor of creating next year’s video.

The American Optometric Student Association also awarded the social media based Virtual Spirit Award to Northeastern State University – Oklahoma College of Optometry and the AOSA t-shirt design competition award was given to MCPHS College of Optometry.

“After 24 years, the Varilux Optometry Student Bowl is still a highlight of the conference, and every year we continue to be impressed with the caliber of students who stand up to the challenge,” said Rod Tahran, O.D., F.A.A.O., vice president of professional relations and clinical affairs for Essilor of America. “The bowl is such a fun, spirited event, and Essilor is proud to support it and the students who are the future of optometry.”

The Varilux Optometry Student Bowl has been coordinated and produced since its inception by Danne Ventura, F.A.A.O., director, professional relations, Essilor of America.

This year’s event was again hosted by David Seibel, O.D., private practitioner in St. Louis. He is past chair, Cornea and Contact Lens Section of AOA, a diplomat in the AAO, was awarded the AOSA Founders Award in 2005 and AOA Young Optometrist of the Year in 1996.

This year, during the competition, participating students came together with Optometry Cares-The AOA Foundation, The Vision Council, The American Optometric Student Association and Essilor of America with the goal to break a Guinness World Record for “the most people wearing sunglasses in the dark.”

The event marked the celebration of ‘National Sunglasses Day,’ June 27, and aimed to bring awareness to the dangers of UV light on the visual system. The Guinness World Record committee is currently reviewing the event to confirm if the record was broken.

David A. Heath Elected President of the Association of Schools and Colleges of Optometry

Lots of Appreciation and More of Your Letters to the Editor

Learn How This Florida Boutique Cultivated an Eyewear Lovers’ Community