WHAT WOULD YOU DO if you could create your dream eyecare business from scratch? Dr. Carolyn Martin had that chance — and Eye Boutique of Sedona is the impressively stylish result.

After more than 20 years as an optometrist and educator, Martin had been looking forward to staying home awhile with her daughter, Mari, who’s 8. But when a former employer, Southwestern Eye Center, decided to close its Oak Creek, AZ, office at Sedona’s southern reaches, Martin knew it would open a vacuum in primary eyecare.

“This area has so many retirees and people who have difficulty driving … the next-closest practice would be a 20-minute drive away,” she says. Martin felt both a calling — and an opportunity.

Working with her contractor and architect, as well as consultants Jay Binkowitz and Rebecca Johnson of GPN and Helen Rogic of Presenta Nova, Martin doubled the former practice’s 1,200-square-foot space. And it seems even larger. Says Martin: “The patients think it’s three to four times bigger, and that just speaks to the layout.”

In the optical area, confident choices abound. “Dr. Martin was fearless when it came to color, selecting bold lime green and orange to contrast with her bright white frame boards,” says Johnson. The energetic feel blends perfectly with a calming reception area. “I did a lot of research on feng shui and colors in business, so that whole reception area is very natural … very earthy,” Martin says. With a stone reception counter that echoes Sedona’s high desert red rocks landscape, inviting furniture arrayed on a plush green rug and plenty of plants, people feel right at home.

Adds Binkowitz: “When I first began to collaborate with Carolyn on this project, I knew that we had to project her personality into the practice.” And because she was not tied emotionally to the old way of doing things, “we were able to create an experience that was centered around the patient. From the look and feel to the explanation and delivery of products and services, it is all about the patient.”

That customer-comes-first philosophy extends to the practice’s staff members — even their job titles, which recall those of far bigger companies. Dawn Mullis, whose duties range from greeting patients to billing, is chief experience officer; Jennifer Davis is chief information officer; and Luanne Murray-Winans, a detail-oriented “equipment guru” who knows how to keep stuff running, is the chief technology officer. “I just thought they should have cool titles because ‘receptionist’ is boring. ‘Technician’ is boring,” Martin says. “I tend to manage by consensus. I have the final say, but I really value my staff’s input.”

There’s a story behind Davis’ title: Before Southwestern Eye Center closed its Oak Creek location on Dec. 31 last year, they mailed a letter to tell patients about Martin’s plans, “but they sent it way too early,”

Martin says. She had originally hoped to open Jan. 1, but permitting snafus meant construction delays. Even before the new location’s buildout began, “Jennifer was taking phone calls and answering emails, so she became the chief information officer,” Martin says. The practice opened in early March, thanks to the efforts of contractor Dennis Roderick Jr. Meanwhile, Martin made sure Southwestern Eye patients and potential customers didn’t forget her. “During that time frame, I did a lot of advertising,” she notes. “I tried to keep our name out there and generate the small-town gossip … ‘She’s coming back.’”

Eye Boutique of Sedona’s customer base is an interesting mix. “We have a lot of baby boomers who have retired early, but they’re willing to spend money if they see the value,” Martin says. Then there are wealthy people with vacation homes, as well as service-industry employees who live paycheck to paycheck and artists, starving and otherwise. “We have people who really need to use their own frame, so even if we need to remake a lens, we can go with what they have,” Martin adds. “I do try to have an option for everybody.” 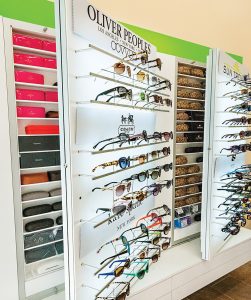 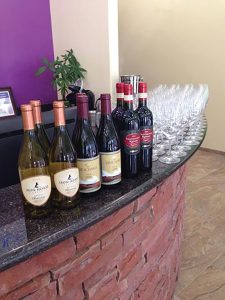 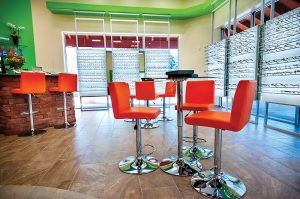 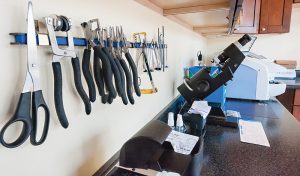 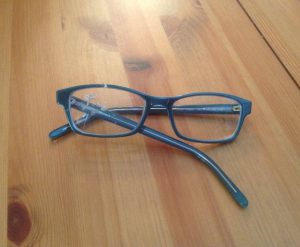 1. ON-SITE SERVICE. Eye Boutique of Sedona does in-house edging, “and that’s new to the entire Verde Valley. We don’t have a Lens Crafters or an Eyemasters. We’re really the only place that can turn eyeglasses around in 48 hours.”

2. WOW FACTOR. “If you buy a frame and lenses, I cover it with my WOW warranty for one year,” Martin says. “If your dog chews up your glasses (see below) … for $25, I will replace the whole thing.” The plan covers damage, but not theft or loss.

3. HIP ZIP. Eye Boutique of Sedona — the only eyecare practice in the 86351 ZIP code — is actually an 11-mile drive from the center of town, “but we have the Sedona address because it sounds cool,” says Martin. (Fun fact: She is married to Dr. Brian Chang, an ophthalmologist who practices at Southwestern Eye’s office in Sedona’s main business district.)

4. COOL IDEA. The boutique’s frame boards are all cabinets that open up like refrigerator doors. “When I can afford it, I’ll actually be able to light both sides of the inside and have shelving, so I could have an entire collection,” Martin says. The dispensary currently has about 1,100 frames on display, but it has room to stock about 4,000.

5. LOCAL HERO. Here’s a rare eyecare business that actually has a PR contact on its website. Martin says Heather Hermen of Sedona-based Front Burner Media helps with everything from social media posts to events planning to scouting the best media buys. “This particular gal is dialed in,” adds Martin.

“One of my favorite ‘hug moments’ was when a resident of a local assisted living facility broke his glasses. His driver brought in the glasses, we fixed them and then went out to his vehicle to fit them on him. He was so happy he asked about getting another pair of glasses and we frame-styled him right there in the car!” — Dr. Carolyn Martin

Related Topics:Eye Boutique Of Sedonaeyecare businesses in Arizona
click to Comment(Comment)
Up Next

Julie Fanselow was the original editor-in-chief of INVISION magazine and now contributes to the publication.