IN AN ERA of “disruption,” the independent retailer’s greatest asset may be adaptability. Sometimes this means putting your own spin on an existing merchandising concept. One of the savviest examples we’ve found is Focus by Discerning Eye, the “store-within-a-store” opened by Discerning Eye of Iowa City, IA, when it relocated last year. The format usually involves a retailer partnering with a manufacturer, but owner Joni Schrup had a better idea…

Discerning Eye owner Joni Schrup found a way to keep business from walking out the door.

THE IDEA: Discerning Eye opened in Iowa City’s Downtown District in 2005. Last year, Schrup moved to her new location a block away.

In that time, Schrup had discerned a pattern: Students from the nearby University of Iowa would come in for an Rx, leave and buy frames online, then return when those frames needed repairs or adjusting. “We were trying to figure out how to capture that market.” So, Schrup did what she does best: She came up with a plan. No, she didn’t litter the store’s Facebook page with student discounts. She and her team had been trying to decide what to do with the new location’s basement, and the store-within-a-store concept took hold, but with a typically thoughtful twist.

This store-within-a store would allow Discerning Eye to cater to people who might ordinarily shop online, without upending its core mission. “Buying online is great … until you sit on your glasses. We adjust all the glasses we sell — free.” But the commitment to quality remains. “We only sell eyewear from independent optical companies, which allows us to focus on quality and sell what we love,” Schrup says. The trick was finding lines priced acceptably for this online-leaning demographic, but which met Discerning Eye’s criteria for quality. Researching that “took about a year.”

THE EXECUTION: At Discerning Eye, they do their homework. “From the beginning, we focused on premier products and top-notch service,” Schrup says. Focus carries, among other lines, Brooklyn Spectacles, mó and Tortoise & Blonde. The pricing at Focus is straightforward. “We use a tiered pricing system. Glasses including prescription are $165, and various upgrades are available for another $30 to $60.”

THE REWARDS: Revenue is up, suggesting the space (the new store is 500 square feet larger than its predecessor) has been put to good use. Despite all the planning, the immediate positive impact left her “kind of surprised. We had goals when we opened [Focus] but surpassed them … It’s really taking off.” Schrup is now planning an online presence for Focus. But could moving online lead to “mission creep,” or compromise? “There is  the perception that online equals cheaper,” Schrup acknowledges.

In a way, Focus by Discerning Eye could be read as an effort to move beyond the false dichotomy of online versus brick-and-mortar, with the store-within-a-store creating a new kind of symbiosis. “It took years of searching to find vendors with eyewear that met our standards with prices that are affordable for all.”

Tackling the complexities of the online arena is something her son, Sam Schrup, is interested in. “He’d love to have an online store,” she says.

Do It Yourself: Open a Store In Your Store

Keep it simple. Focus offers a single price on all its frames including prescription lenses, with a few tiered packages at additional cost (e.g., upgrade to thinner lenses for $30).

Do your homework. The mother store grew out of a school project by Schrup’s son. True to form, the pair spent a year researching eyewear before they opened Focus.

QUOTE a poet. For a store willing to challenge convention, invoking Emily Dickinson seems justified: “Much Madness is divinest Sense / To a discerning Eye…” she wrote. 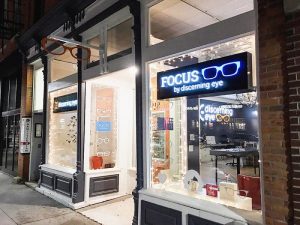 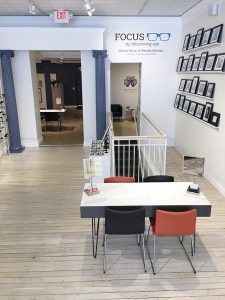 Related Topics:Best of the Besteyecare businesses in IowaINVISION September '17
click to Comment(Comment)
Up Next