Summer is a Verb

Greg Erwin, drummer for up-and-coming band Saint Motel (saintmotel.com), wears model Hyannisport from VICTORY OPTICAL. From the compound on Cape Cod to Lollapalooza in Chicago (where the band will be performing), this frame has you covered. victoryoc.com

This article originally appeared in the July 2016 edition of INVISION.

Black is the New Black

Summer’s not for everyone. Karl Lagerfeld may be known for his trademark dark sunglasses, but he doesn’t seem like a beach kind of guy. If he ever takes his sunglasses off, we can see him sporting his namesake model Karl Lagerfeld KL912. Shown in black (of course), but also available in Havana, blue, burgundy and green. marchon.com

The newest Paper-Thin Titanium capsule collection, Valerio Sommella VS1 for Modo, is architecturally inspired, so don’t be surprised, when wearing model Brera, if tourists stop to ask you what building you designed. modo.com

The tasty color combination of model IC9038 from ICECREAM looks good enough to eat. But this confection is made from stainless steel, with signature laser cutting, so hold the sprinkles. planbeyewear.com

Model Adrienne Vittadini AV1188 from Match, is a good choice for rainy days — the bejeweled end piece will provide some shine when the sun is not cooperating. matcheyewear.com 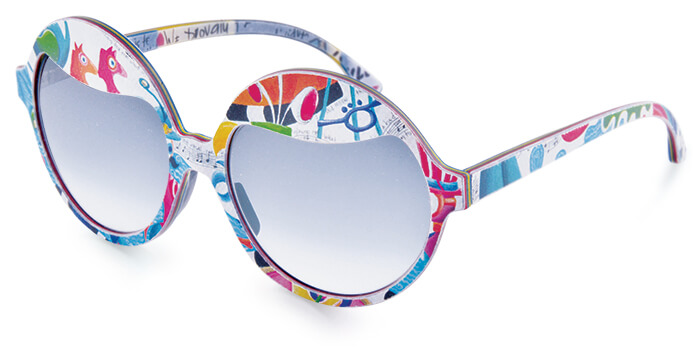 Fun in the Sun

Ride the wave-like front of the limited edition Auril 12 by PAPER STYLE to an endless summer of fun. Its unique shape and colorful design by Dutch artist Truus Brands will be the talk of the beach. paper-style.it