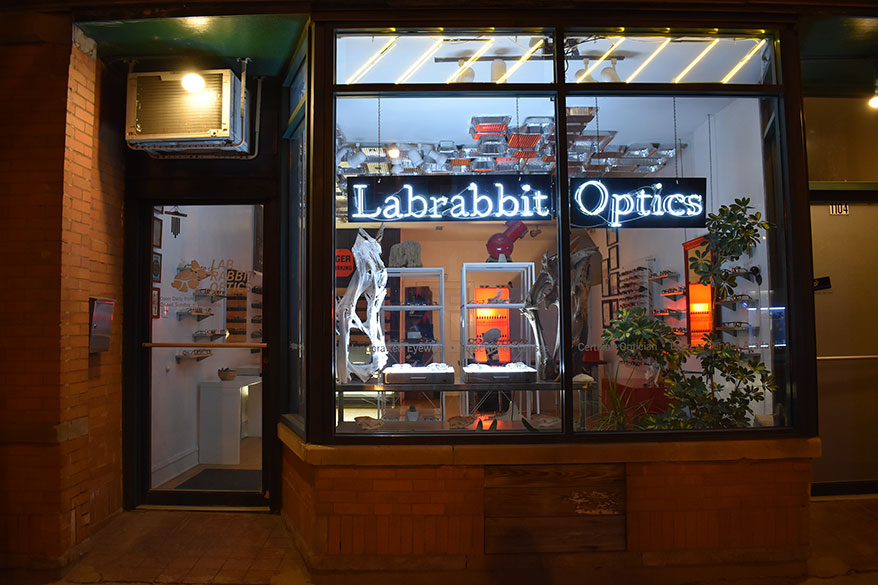 The brand’s common font extends to the neon sign in the front window.

COYOTE DEGROOT, OWNER OF Lab Rabbit Optics, is enthusiastic when asked to discuss the home-grown branding effort at his Chicago optical. So his initial description of it — “simple, maybe even boring” — is a little unexpected. His clarification is just as enigmatic: “I want you to feel like you’re living 8-10 months in the future: ahead of the curve, but not about to alienate your friends at the corner pub. I constantly strive for increased understanding and visual clarity.”

Lab Rabbit Optics owner Coyote DeGroot wants you to feel ‘like you’re living 8-10 months in the future: ahead of the curve, but not about to alienate your friends at the corner pub.’

The name of the business (an allusion to its owner: “almost half my life has been spent in a lab,” he says, “cutting lenses and jamming tunes on the stereo”) and its visual analog — the brand’s central motif is a rabbit in silhouette superimposed with two pairs of frames — are both simple and loaded with the many associations that animal carries, from vitality and creativity to a certain madcap quality. It’s a great lesson in the totemic power of a well-chosen logo.

DeGroot is not particularly interested in catering to some particular “set” or demographic. His “fairly austere” look appeals to his customers, he says, because they “abhor flashy, eccentric looks in lieu of more versatile, understated designs with clever details.”

Lab Rabbit’s look is defined as much by what it eschews as what it contains: DeGroot doesn’t believe in point-of-purchase materials, brochures or catalogs. Photos of models are “disingenuous,” he says. “I prefer photos that focus strictly on the eyewear or activities within the shop. I personally photograph my frames, design my signage, and create all web and social media content. People who know me also follow my private social media accounts, where they can enjoy a more ‘raw’ view into my weird world.” Non-eyewear-related influences include “techno music, magazines of all sorts, overpriced restaurants.”

The branded material itself includes lens-cleaning solution, business cards, matchboxes, buttons and tote bags, most of them rendered in two-tone color schemes with a common font that extends to the neon sign in the optical’s display window.

DeGroot is a walking embodiment of indie optical retail — no staff, no outside investors, and entirely self-funded. He’s the only person the customer deals with from start to finish (this includes cutting all lenses). In keeping with this, he does the general layout and design of his branding himself, “but I leave the manufacturing of all products to the professionals.”

To his fellow ECPs pondering a branding boost, DeGroot offers some typically cryptic advice, seemingly part admonishment to keep things simple, part encouragement to stir things up: “Just remember that whatever you’re doing is a lot less sexy than you think it is.”

Among the promotional freebies at Lab Rabbit Optics, the matchboxes have been a surprise hit, owner Coyote DeGroot reports: “I don’t quite understand the matchbox thing, but it’s been a huge success… My non-customers — my friends, the mailman, etc. — snatch up those matches like they were stockpiling for the apocalypse. For some older folks, they reminisce about collecting matchbooks from their favorite taverns, back in the day. I always do my best to give my products an understated, luxurious feel…but I suspect that nostalgia is the main driver for the matchboxes’ popularity.”

Related Topics:eyecare businesses in IllinoisFeatured
click to Comment(Comment)
Up Next