FACEBOOK AND FOURSQUARE, Yelp and YouTube, Twitter, Tumblr, Vine and Viber: an incantation worthy of Severus Snape. Figuring out how to make them work magic, while tapping into the cultural zeitgeist, can be daunting. To quote Snape in Harry Potter and the Half-Blood Prince (out of context, to be sure) they’re “a many-headed monster, which, each time a neck is severed, sprouts a head even fiercer … than before.”

Fine, Snape was soliloquizing about the “Dark Arts,” but we think his spirit has been channeled by Eisenbrei Plaza Optical, a nearly 45-year-old practice in Canton, OH, now run by the founder’s son. Mark Eisenbrei realized he could use social media and pop culture “to communicate our business, education and other promotions.” After a few experiments, he came up with something fun: a Harry Potter-themed Facebook contest.

Eisenbrei Plaza Optical was founded by Mark’s parents, Maurice and Betty, in 1963. Mark took over three years ago, but recently got more active online. “The social media contests started within the last few months,” Eisenbrei says. As July approached, some bookworm in the back office realized the birthday of one of the great bespectacled fictional characters was approaching. Someone else stumbled upon an old Halloween costume. The stars aligned and a Facebook contest was born.

“We’re longtime fans of the boy wizard,” says Eisenbrei. “We launched the campaign during his birthday month of July. Harry Potter is one of the most famous bespectacled characters of all time. It’s a part of his identity, like many of our customers. The goal was to connect with current customers and to draw in new ones.”

To enter the “Harry Potter Prize Pack” giveaway, fans had to like, tag a friend in, and share an image that the store posted on its Facebook page. While third-party contest apps make it easy to capture emails and convert sales, Eisenbrei went with a simple timeline contest. These have their advantages: quick and cheap to launch; newsfeed-based; easy to enter; immediate exposure. “We simply used our Facebook page,” Eisenbrei says. “We dedicated one evening to taking pictures to serve as posts. We filmed several videos.” Staff went through each response to the store’s graphic. Those that hadn’t followed directions were eliminated. The names of the remaining entrants were recorded, and the winner plucked at random from a glasses case. The prize included a hardcover of Harry Potter and the Socerer’s Stone, a $5 Books-A-Million gift card, and other Potter goodies.

Eisenbrei sees Facebook primarily as a branding and community-building tool. By these criteria, the contest succeeded. “The reaction was very positive and [the contest] well received. The online response was overwhelming; we had the most shares ever on our Facebook page. People had fun with it, that is what matters. We wanted to show off our lighter side.” You don’t survive for four decades without being adaptable. The “Potter” Facebook contest demonstrates not only the embrace of a new marketing tool, but also a creative spirit, finger on the pulse of modern culture and a willingness to listen to next-generation team members, allowing a venerable practice to maintain visibility across eras.

“It helped us connect with customers and has given our optical exposure like never before,” says Eisenbrei. “We reached so many people. This put our business in front of a whole new audience.”

And the winner? Holly Rembiesa is in Hogwarts heaven. “Considering she had just visited a Harry Potter festival in Kent, OH, the weekend before she won, she was very excited.” 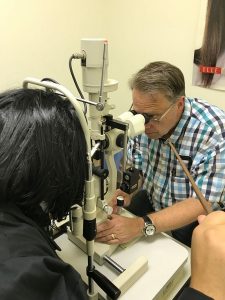 Do It Yourself: Run a Social Network Contest

1. Need help? Try a third-party app like Heyo, Wishpond or Shortstack to run your contest, or else go it alone and invite people to enter by liking, sharing or tagging a post.

2. Ground rules. Facebook has rules to run contests. Having fans like a post to enter a contest was banned until recently. There are still some restrictions: invmag.us/101702

3. Narrow it down. What type of contest is it? A sweepstakes? Photo contest? Why not put entrants to work designing your new logo or voting on which line of eyewear to add?

4. Easy does it. To kick off your contest, announce it via a status update and add the rules and relevant info to the first comment. Avoid long text updates — keep it punchy and fun.

5. Toss the tags. Keep hashtags out of your contest-related posts, comments and updates. Studies show they dampen response.

Advertisement
Related Topics:Best of the Besteyecare businesses in OhioFacebookINVISION October '17Marketing
click to Comment(Comment)
Up Next