One ‘visionary’ OD who knows how to put the eye in team.

DURING A SUMMER, Dr. Selina McGee got her first job in eyecare. Little did she know that this experience, in Pennsylvania, would pave the way to define her professional career in the decades ahead of her — all the way to Oklahoma. “I worked for two optometrists, and I fell in love with it,” McGee says.

McGee now runs two practices: one where she’s been for 14 years, and this one, which she took over about 2½ years ago. The story of how McGee came to own what is now Precision Vision Edmond, however, starts several years back. “There was a doctor I knew of, Dr. Larry Olsen, and I thought he might be at the age where he was considering doing something different, so I cold called him and said, ‘I’m not a crazy person, this is going to come way out of left field, but hear me out.’” Fast forward through a lunch where the two hit it off, followed by several years of Dr. Olsen prepping his patients for the switch (praising McGee every step of the way). “You hear about so many of these transitions going badly,” McGee says, “but we checked our egos at the door.”

Having already put years into another local practice (which she continues to run), McGee had a clear vision of how she wanted to run the business. “I wanted a practice that’s built around the team,” she says. “I wanted to continue the legacy that had been built for 40 years, and make it a positive patient experience, but I also wanted it to be a positive employee experience.”

McGee keeps this vision firmly in place as the practice grows, and she ensures that everyone on her team is confident in their own decision-making skills and ability to work well together. She’s held two full-day retreats with the team so far, the results of which have been evident in the group’s morale and results. Every Monday, in a space called the Huddle Room, they meet. “We talk about what we’re grateful for, and what our intentions are,” McGee says. “I change that up every week, and it’s more personal because I want people to realize they’re working with other people, not robots.”

These interactions are invaluable and inevitably help in other areas, like conflict resolution. So when conflict resolution is in order, McGee is all about moving forward. “We immediately go in the Huddle Room and talk about the breakdown: what happened, where, what we learned from that,” she explains. “And finally, how do we move forward so it doesn’t happen again?”

It’s clear that the aforementioned moving forward happens swiftly and genuinely. In fact, while she takes the practice quite seriously, McGee says the most fun thing about Precision Vision is the people. With true excitement in her voice, she describes something that patients — as well as the staff — love. “All of our name badges have our little owl [logo] on them, and everybody has a fun name,” she says. Dr. Kyle Henderson is Master of One or Two. The receptionist is the Director of First Impressions. Emilee Beard, who does insurance, is the Benefits Big Shot.

Our technician, Amanda Cole, goes by the nickname Wingman. With simultaneous joy, pride and a laugh in her voice, she continues, “I’m the Visionary, and Paige Perry, who is a floater, wears a badge that says, ‘D. I’m all of the above,’ and we recently added Germaine Shock. Her name tag says ‘They Call Me G.’” Not to be outdone by anyone, the office manager, Brianna Shara, is referred to as Happyness Advocate. “We purposely misspelled Happyness to be like the movie [The Pursuit of
Happyness],” she says. “That’s what you can’t buy down the street and that’s what makes us different.”

And the fun doesn’t stop with the staff. McGee, who describes herself as “someone who jumps right in and goes for it,” seizes the opportunity to find fun and positivity in everything — especially the glasses themselves. “The most fun ones I have are always the ones on my face, you know?” She describes her latest favorites, a pair of round MODOs with a double bar.

“They are geek chic,” she says. “And my other favorite — because you can’t have just one — is a Lafont. It’s a re-edition of the P3s, but navy and white polka-dot fabric. They are fabulous.” We have no doubt. 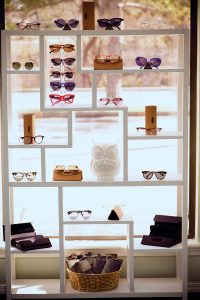 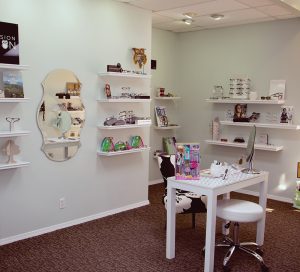 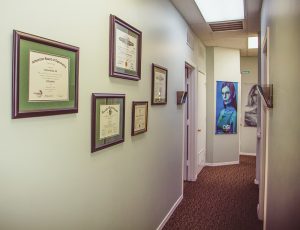 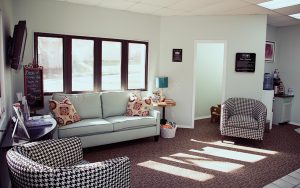 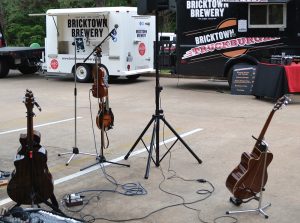 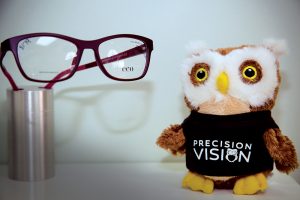 1. WELCOME HOME: The inside of Precision Vision looks like a living room. “It doesn’t look like a doctor’s office,” says McGee. “I want people to be comfortable. There’s comfy chairs and a cute sofa and a little place where they can have coffee and tea.” The optical is set up in the middle of the practice without frame boards. “I hate frame boards. So it’s all open shelves and the exam rooms kind of continue that personal space.”

2. COMMUNITY COUNTS: Precision Vision stays active in the community, partnering with local organizations and supporting local efforts. “Every month we try to pair with something local — it’s important to bring awareness and to help fund-raise,” says McGee. In August, they worked with a group called You Are Special, which gives kids in need a chance to shop for new clothes before school starts.

3. PLAYING GAMES: McGee has implemented open-book-management, customized-for-optometry strategies from the book The Great Game Of Business, by Dr. Danny Clark. “I went to a retreat where Dr. Clark, who practices in Wichita Falls, had done this program,” she says. “I went to the class and he had a map of how to implement it. It usually takes 90 days, but we did it in two weeks!”

4. FLOWER POWER: A self-described flower fanatic, McGee is the real deal in the gardening department. She sits on the Edmond Beautiful board and handles the group’s photography. And while she handles the landscaping at her own home and the practice, McGee is still a fan of florists. “I have fresh flowers delivered every Monday to the office,” she says. “I’ll put a new frame in the arrangements, and say, ‘Here’s what we got this Monday!’”

5. TESTING, TESTING: Frame selection can be painstaking and many patients really need some time to feel good about their decision. At Precision Vision, patients who participate in the 4×4 Program can take home four frames for four days and take their time to decide. The results speak for themselves, as McGee reports “more multiple-pairs sales and less remakes.”

Dr. McGee added a Zig Ziglar quote on the wall of their Huddle Room, that says, “You don’t build a business, you build people, and then people build the business.” Toward that end, McGee tackles the concept of accountability with an “above the line/below the line” approach. “Above the line is true accountability,” she says. “It’s ownership, commitment, and problem solving, while below the line is where you become a victim.” She takes a clear stance on this, noting, “One of the things we talk about is when you see something, you own it, you solve it, and then you do it. Don’t wait for somebody else to do it. Don’t make an excuse. The cool part about that is when they take that and run with it, they make much better decisions than I would ever make.”

Related Topics:eyecare businesses in OklahomaPrecision Vision
click to Comment(Comment)
Up Next

‘Happyness’ is the Goal at This Fast-Growing Oklahoma Practice

Rachel Bozek is a contributing writer for INVISION.

Ready to see what happens when you insist on the best? When Eyecare Professionals insisted on Varilux lenses with every presbyopic patient for 30 days, not only did they provide sharp, seamless vision so that their patients could truly see no limits, but they also created trust, loyalty and increased profitability. See for yourself and take the Varilux Challenge today at VariluxChallenge.com.

Surprise! US Retail Sales Rebound in Face of Delta Variant

ECPs Show Off the Glasses They Most Love to Wear