This article originally appeared in the March 2015 edition of INVISION.

ED: Last month, Robert Bell shared that selling is based upon a scientific principle: the law of motion. This month, he uses a pendulum to illustrate how this law applies to selling.

For whom does the pendulum swing? It swings for everybody. There ya go. I just gave you the secret to selling! If you remember that, the way you now approach your patients will drastically change and your sales will dramatically increase. By the way, so will your customer satisfaction. The only thing that will decrease will be your level of frustration. Don’t leave now; let me explain.

Last month, in “The Science of Selling,” I shared one of the rules of the law of motion. I’m paraphrasing:

The best way to illustrate the LoM is with a pendulum. Take a look at the diagram: 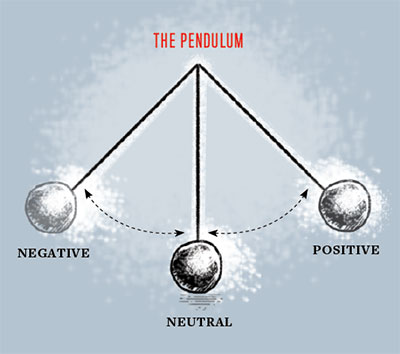 A pendulum in motion swings back and forth from negative to positive and back again. The pendulum in the neutral position has no motion.

People walk into your office in one of the categories that we’ve charted on the pendulum diagram. Some walk into your office very positive and happy: “My friend just got the coolest pair of glasses here and I want them, too. Plus, I need new sunglasses. Here’s my wallet!” Don’t you just love ’em? Yet, they make up a very small percentage of the patients walking through your door.

The other small percentage of folks walking through your door are the negative, nasty patients. I don’t have to tell you what they sound like, do I?

But most of your patients are neutral. They might sound something like this: “Oh, let me think about it” or “It’s a little out of my price range” or “I don’t think I really need this now.” They’re not happy and they’re not angry. They’re just smack-dab-in-the-middle and they’re vigilant about staying right where they are. Why?
Because they know what they know and will not allow you to persuade them otherwise. (In past columns, I’ve told you selling has nothing to do with persuasion). Why do they like the middle so much? Think about when you’re a consumer. We’re all wary of being persuaded.

There’s nothing motivating them to move … yet.

So, of the three types of patients, the positive patient is the easiest to sell. They’re excited about being there and their listening is turned on. They want and seek your help.

Now, of the two remaining types, negative or neutral, who is easiest to sell?

Before you answer, remember the LoM. Most people will tell me the neutral or average patient is easiest to sell. But this patient is not moving at all (an object at rest tends to stay at rest). The negative patient, however, is in motion and can only go in one direction (positive) and will get there with uniform velocity.

So the negative patient is easier to sell than a neutral one. Sounds illogical, but they’ll offer less resistance (because there is another rule of the LoM that I haven’t revealed yet).

My last question is the most important question I will ever ask you because it’s the key to everything!

In order to sell your average/neutral patient — y’know, the ones stuck in the middle and not moving at all — in which direction should you move them? Positively or negatively? Join me next month as this, and so much more, shall be revealed.

ROBERT BELL believes in “uncommon sense,” inside-out thinking and challenging the status quo of traditional selling methods. He is the founder of EyeCoach and created The EyeCoach Selling System specifically for ECPs. In addition, he is co-director for Project Homeless Connect-Vision Volunteers in San Francisco. For more information, email him at [email protected].

Barbara Wright: Give ‘Em an Eyeful