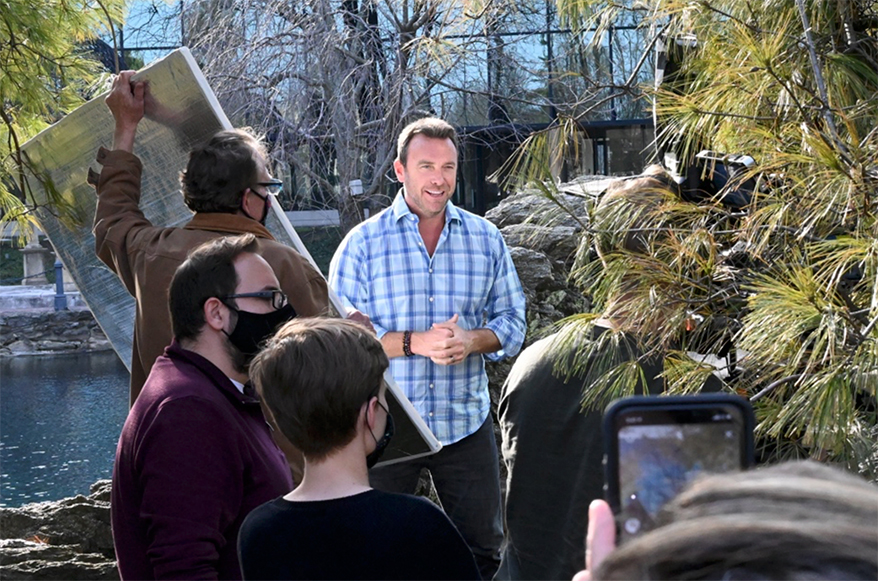 Behind the scenes during the filming of Salus University’s episode of “The College Tour,” a new series streaming on Amazon Prime Video and Roku, with host Alex Boylan.

In one of the most recent episodes of “The College Tour,” a new series streaming on Amazon Prime Video and Roku, 11 Salus students and faculty tell their personal stories about pursuing a health science education. To debut the episode, the University will host a launch party along with a cast member meet-and-greet Thursday, June 10 at 5 p.m. at the Hafter Student Community Center located at the school’s main campus in Elkins Park.

Guided by host Alex Boylan, winner of CBS’ “The Amazing Race” in 2002 who went on to produce and host leading shows on PBS, CBS, the Travel Channel and more, the show’s segments cover topics such as world class faculty, history and legacy, early clinical exposure and student life. Each segment explores a different topic through the lens of a student.

“People are going to Salus because they want to work in the medical field, and they want to become a doctor. They’re going to school with a higher purpose than many,” Boylan said. “That’s probably the overwhelming feeling I experienced throughout the entire filming process. A lot of students talk about early hands-on exposure since day one, working with people in health care. Salus does such an amazing job and being so close to Philadelphia, where health care is a leading industry, you can sense how fulfilling the academic experience is at the school.”

Speaking of Philadelphia, the setting of the entire episode, which was filmed over a week in March, LaBarth and Niesen’s segment titled “A Prime Location” focuses on all things Philly, offering East and West Coast perspectives of attending school in the City of Brotherly Love.

“Being a part of the filming process was really incredible. My journey to Salus started on the West Coast and it hasn’t been the easiest, but I love being able to share my experience with others,” Niesen said. “My favorite part of the filming process was seeing how they produced my segment and the magic that happened to make it into the final product!”

Although early clinical exposure is an ongoing narrative throughout the episode, it was the emphasis of Shah’s segment.

“My favorite part about filming was seeing behind the scenes. It was so interesting to actually interact with the people who helped with the creative process, the lighting, the audio team and everyone involved,” Shah said. “It showed me that normal people like us are able to put their skills and talents together to make something great.”

“The show highlights the most important aspects of our University – students and faculty,” Dr. Mittelman said. “They are the stars and their passion, determination and enthusiasm for their health care professions and Salus came through loud and clear. The University’s episode of “The College Tour” really gives us an opportunity to shine and share individual and personal stories about what it means to be Salus strong with the rest of the world.”

But the production team, including Boylan, had one request before they yelled cut.

“You can’t go to Philadelphia and not get a cheesesteak,” he said.

The Salus University episode is available at www.thecollegetour.com or by searching “The College Tour” on Amazon Prime Video.

11 Images That Show Why Huxley Optical in Minnetonka, MN, Was Named One of America’s Finest Optical Retailers.