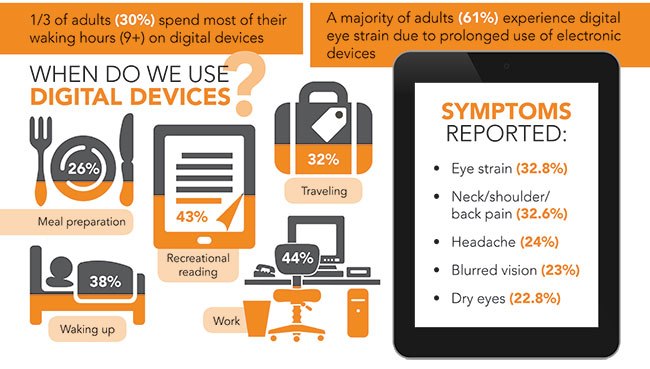 The Consumer Electronics Show in Las Vegas was the right place for the Vision Council to release its 2015 report on digital eyestrain and dispense “eyegonomic” tips to some of the planet’s most avid digital device fans. Read the report and get an infographic to share at thevisioncouncil.org. Zeiss has an eyestrain quiz to share via social media, too. See eyestrainquiz.com.

Vision Source recently passed the 3,000-member mark with the addition of Dr. Ben Gaddie, owner and director of the Gaddie Eye Centers, a full-service multilocation practice in Louisville, KY, that was started by his father more than 40 years ago. He is also a noted lecturer and renowned advocate in the industry. Vision Source is the largest doctor alliance in optometry and the second largest optical retailer in the United States. The network gives independent optometrists support in areas such as managed care strategy and contracting, practice management, collective buying power and strategic marketing. Information: visionsource.com.

Smith Optics has a new look for its 50th anniversary year. Safilo Group, which has owned the company since 1996, announced last year it would move Smith Optics from its Ketchum, ID, base in a bid to boost Smith from its strong North American snow sport position into a global eyewear brand. See a video with the new branding at smithoptics.com.

AWARDS SEASON KICKS OFF IN NYC

The Optical Women’s Association will debut a new event at Vision Expo East. Holly Rush, president of Luxottica Wholesale North America, will keynote the OWA Champagne Breakfast starting at 7:30 a.m. March 19 at the New York Marriott Marquis. Both the breakfast and the traditional Star Award Ceremony and Networking Event — set for the evening of March 20 at the Calvin Klein Showroom — will also honor OWA’s 2015 Pleiades Award winner Maureen Cavanagh of the Vision Impact Institute sponsored by Essilor and Pyxis Award winner Amy Spiezio, executive editor of Eyecare Business magazine. Information: opticalwomen.com. Also at VEE, Ed Greene, who recently retired after decades of service to the vision care industry, will be honored at Prevent Blindness’ Person of Vision Dinner on March 19 at Gotham Hall. The Prevent Blindness Person of Vision Award recognizes an individual for outstanding leadership and dedication in the field of vision and eye health. Tickets cost $350, or $3,500 for a table of 10. The Vision Council is title sponsor of the event. Information: preventblindness.org.

Revo has rolled out the Open Road Lens, an amber lens designed to enhance vision in bright or low light, on the road or water, and in everyday life. The lens incorporates image intensifier filters that improve light adaptation in both bright and low light conditions with relative weighting in the mid to long range wavelengths. Like all Revo lenses, the Open Road collection blocks 100 percent of UVA, UVB, UVC and HEV light, eliminating all harmful rays including low level blue light. Information: revo.com.

Johnson & Johnson Vision Care plans a wider 2015 U.S. launch of 1-Day Acuvue Define contacts that accentuate natural beauty while supporting healthy eyes. The company says the lens is already a top seller in Asia. The design isn’t a color contact, but combines an outer darker limbal ring (to give eyes greater definition by creating contrast between the iris and sclera) and an inner translucent light-effects pattern to add depth and definition without changing the eye’s natural color. The lenses will be available in plano and vision correction ranges from +1.00 to -9.00 with a base curve of 8.5 and diameter 14.2mm in three styles to complement all eye colors. Information: acuvueprofessional.com .

This article originally appeared in the February 2015 edition of INVISION.