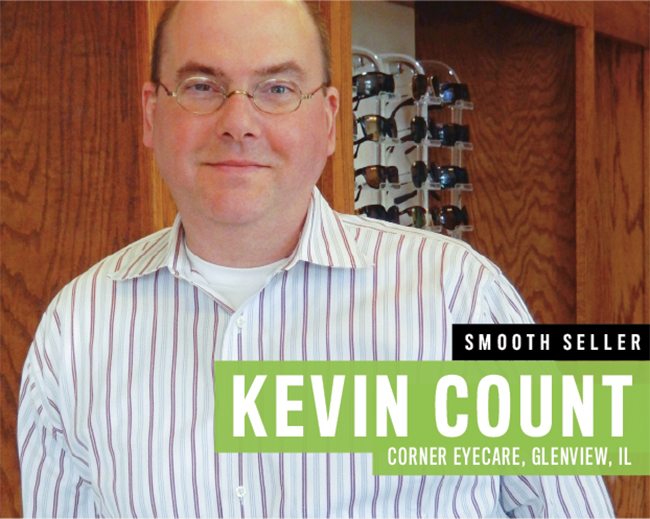 After three decades in vision care, Kevin Count, manager of Corner Eyecare in the Chicago suburb of Glenview, IL, says he enjoys the business aspects of the industry more than ever. That entrepreneurial spirit prompted him to start a wholesale optical lab that helps him navigate the key challenges of staying competitive: containing costs, reducing revenue fluctuations and maintaining quality. “It also gave me insight as to how others operate their business,” he says. Count is also a founding member of the Society to Advance Opticianry. — JULIE FANSELOW

This article originally appeared in the June 2015 edition of INVISION.

➤ I own four pairs of glasses. My favorites are Lunor for their classic designs, and my mainstays are both Lunor frames: one rimless and one full metal. I also wear a Kaenon Sunglass with Drivewear lenses. I long ago stopped with the large collection of eyewear.

➤ My most memorable sale was when a very pregnant mother came in with her toddler son for his first pair. She said she felt guilty that she had not known there was a problem with her child’s vision. After soothing her concerns, we started finding frames for her son Dennis. When the glasses were completed, Dennis’s father brought him in, as Mom was in the hospital, having given birth to their new child. Dennis fussed over having glasses on, but after a moment, he calmed down. He looked at his father, reached out to touch his father’s face and giggled. It was the first time Dennis was able to clearly see his father.

➤ My favorite customer is is the one who is amiable to the process. They’re happy to see better and that their spouse and friends like their new specs.

➤ Prentice Optical Lab started in my office but has moved to its own location. It’s been a learning process. My background was in running optical, not labs. I spent the early days of my career in a wholesale lab, but I was never involved in the day-to-day. Thankfully, I was able to hire a great lab manager.

➤ I’m constantly amazed at how many ways a business can approach the same question.  We have clients that sell in very fashion-forward environments that sell product I would never dream of having in my location.  We also have offices that operate in such a small space I’m amazed they can make it work.

➤ My favorite things to do outside of work include gardening and working on my bonsai trees. If I wasn’t working in the optical business, I’d probably be professional gardener or a corporate raider.

➤ If I met someone on their very first day in optical sales, I’d tell them the same thing my mentor said to me: If you ever want to make any money in this industry, you’re going to have to own your own office.

➤ I’m most optimistic about the future of our business because there is a great amount of possibility in this industry. Yes, there are pressures from vertical alignment of companies, but these all leave a void that must be filled.

➤ Something you didn’t ask but you ought to know about me: As a pirate I can only say that the cannons don’t thunder, there’s nothing to plunder, I’m an over-40 victim of fate.

Colleen Galanti: My Favorite Part of My Job is ‘Simply Everything’

Think You’re Having a Bad Day? ECPs Told Us Their Biggest Screwups

Prevent Blindness Declares December as ‘Give the Gift of Sight Month’

Check Out These 17 Eye-Catching Optical Murals