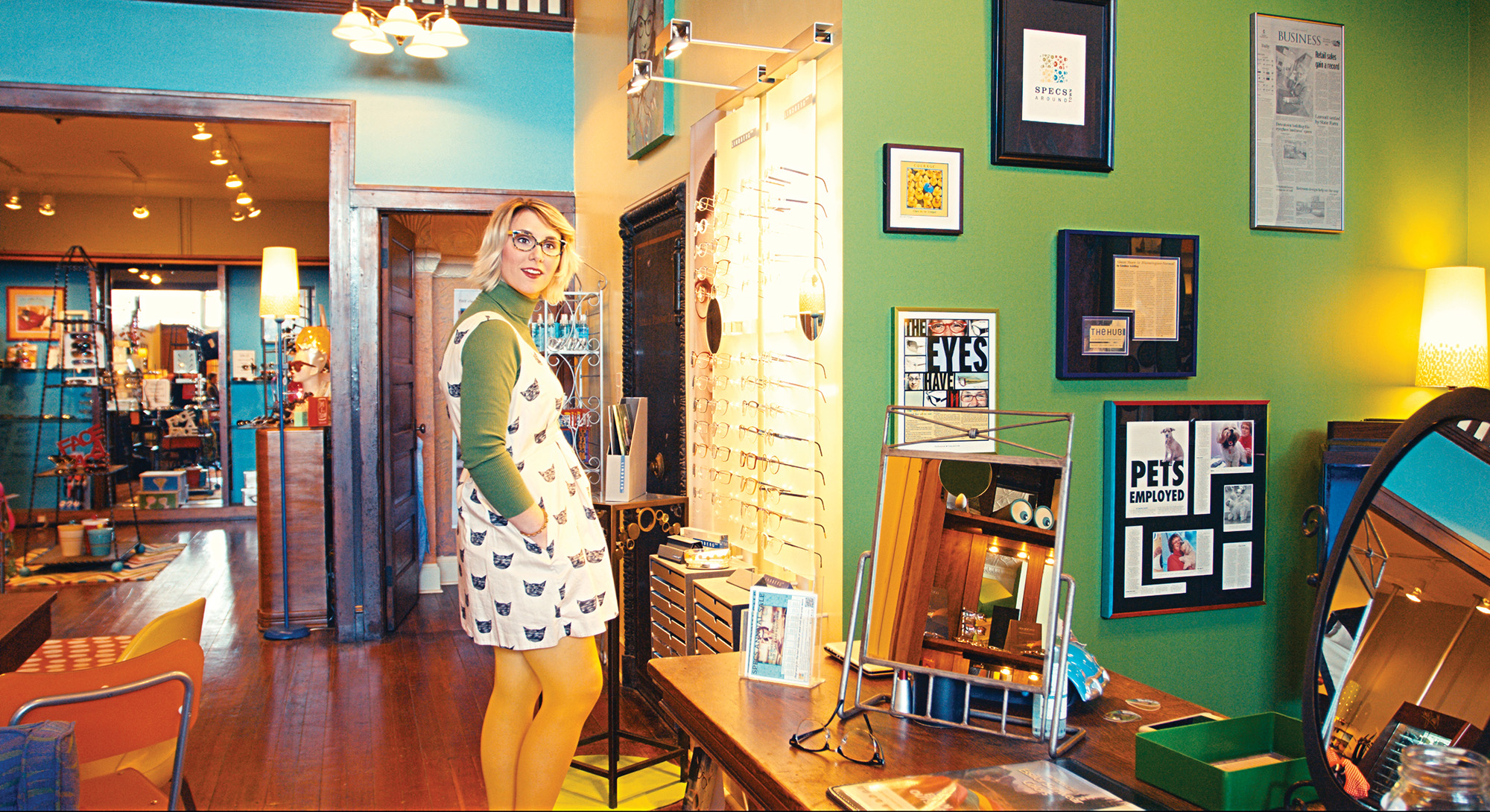 A Bloomington, ll boutique stands out from the crowd.

LOCATED IN CENTRAL ILLINOIS, Specs Around Town offers a cozy boutique setting within a rather expansive geographical area. The downtown Bloomington shop serves clients from Chicago (two hours north) and St. Louis (two hours south), as well as Peoria and Champaign-Urbana. Even so, the experience clients receive is personal, customized and unique. Always unique.

The shop’s eyewear selection and a high level of customer service are what Kubsch and her team consistently offer. And Kubsch is grateful for the assistance she’s had from social media in growing her client base. “The number of times we’ve had people new to our area, but maybe who’ve always worn Theo or Lindberg, do a search and say, ‘I drove an hour and a half because I see you carry Theo’ … that never would have happened 20 years ago,” she says.

When new clients arrive, Kubsch, or someone on her team, will offer them a brief tour of the shop to ensure they understand the overall layout.

Kubsch notes that pulling frames and sitting down for a try-on session is always the goal, but the priority is each client’s comfort level. “Some people are more comfortable just browsing because they are maybe intimidated,” she says, “but when you let them browse they often don’t know where the heck to start.”

When the Specs Around Town staff observes what Kubsch describes as a “deer-in-headlights situation,” they step in. “It’s good if we can wrangle them a little bit and get some conversation going to find out a little more about their lifestyle, what they do, how they do it, and what kind of look they’re going for.” Armed with these details, the staff can make educated suggestions. Kubsch describes how the next step of the process often unfolds, saying, “We’ll hand somebody something to try on and at first they’ll give us a look like, ‘Are you kidding me?’ And then they put it on and they’re like, ‘Oh my gosh, I never would have picked that up on my own!’”

As for Kubsch’s direction to her staff, it’s the same as what she strives to do herself: “just listen to people.” She says, “What we do is not rocket science. Unfortunately Illinois is not a licensed state, so to find anybody that has any background or training is really, really far and few between. I’ve really lucked out [with my employees].”

“We don’t want to overwhelm people,” she says. “If you have somebody new here they’re overwhelmed to begin with. And then if you immediately say, ‘We can make you a pair of glasses! You just have to pick from those 8,000 different colors and decide if you want them matte or polished,’ you can lose someone really fast. You’ve got to get to know who you’re working with.”

On the marketing front, Specs Around Town keeps in touch with clients — current and potential — through the use of several social media platforms. “We are Instagrammers and on Twitter and Facebook,” Kubsch says. Last winter, the shop also did a new commercial, which can be found on the boutique’s website.

From making coffee, to cleaning floors, at Specs Around Town, “Everybody does everything,” Kubsch says. “I feel very lucky that everybody in the crew I’ve had over the years pretty much gets that and is willing to all row the boat in the same direction.” And that would clearly be the right direction. 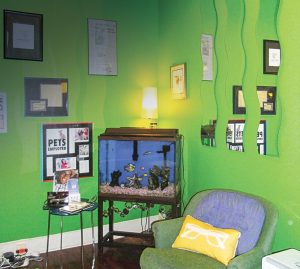 1. ICE CREAM, YOU SCREAM, WE ALL SCREAM FOR … GLASSES! When Kubsch first considered starting her own business, she pondered getting an ice cream truck—Good Humor style. As the plan became more real, her eighth grade daughter suggested a Volkswagen Beetle and the plan evolved into a mobile optical in 1998. “I haven’t had a Beetle since 2008, and two weeks ago, a guy told us he knew about us because, he said, ‘I always saw that Beetle driving around.’”

2. A TRUE COMMUNITY GARDEN: Specs Around Town participates in Bloomington’s Adopt-a-Pot program, wherein they oversee a large flower pot near their location. “We have a huge tomato plant, it’s like killer size,” says Kubsch, who grew up gardening and established this year’s pot as a community garden. “We’ve got green beans, green peppers, basil, oregano. If you’re cooking tonight and want any [vegetables], take some.”

3. EYZ ON THE ROAD: The original Specs Around Town Beetle featured vanity plates, BUGEYZ4, and Kubsch still uses the plates on her current, non-opticianry vehicle. She says, “People have a hard time with it. We get Bug Easy, Buggies. I’m like, ‘It’s bug eyes!’”

4. HOLIDAY, CELEBRATE! Holiday, Celebrate! Each winter in downtown Bloomington, local businesses participate in an event called Live Holiday Windows. “I must say, feather in our cap, we probably have the most creative [display] every year,” Kubsch says.

5. ALL EARS: When they come into the shop, clients often take notice of the nine-foot-tall corn cob with many big eyeballs. It’s affectionately named Cornea Ears Looking at You, and lives in a large flower pot.

Honorary shop supervisor Lennie stands guard in style. While many dispensaries are moving in an as-neutral-as-possible direction when it comes to décor, Kubsch likes bright colors and strives to inject as much personality as possible into her shop. With that in mind, she has made use of 1950s vintage sofas from her own grandparents’ home. “We just re-reupholstered the loveseat,” she says. “Every strip of it is a different fabric. It’s polka dots, it’s zig-zag, it’s rick rack, it’s Naugahyde in one area. People come in and go, ‘Oh, my God, that couch is so cool.’”

Related Topics:eyecare businesses in IllinoisSpecs Around Town
click to Comment(Comment)
Up Next

Rachel Bozek is a contributing writer for INVISION.