Imagine the worst thing that could happen to your business … Would you be able to recover?

Running a business is hard work, and sometimes the challenges and hurdles can nearly break you. So when a major catastrophe strikes, it can mean the end of business  for many.

Natural disasters, technology failure, unscrupulous colleagues, personal tragedy: The next few pages are full of eyecare providers that faced just the sorts of challenges that have destroyed many businesses. Even the best emergency planning strategy is put to the test when the world conspires against you, but here are their stories of how they persevered and brought their businesses back from the brink. 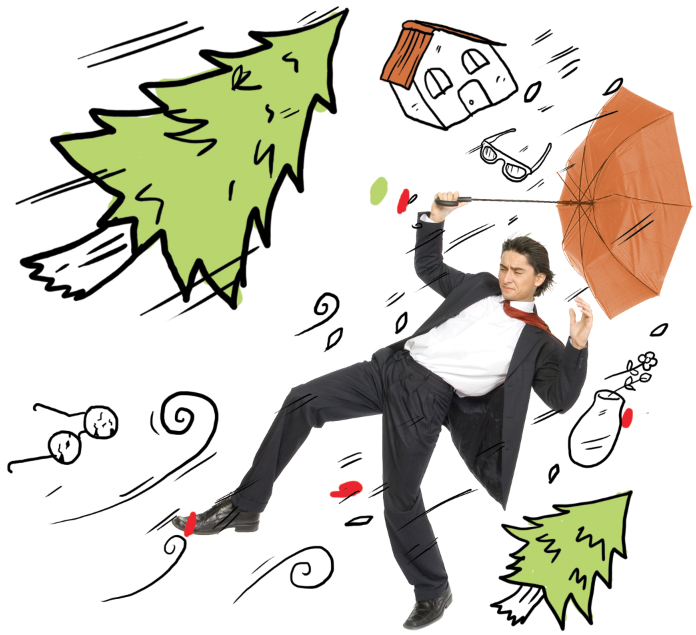 When A Hurricane Strikes

Acts of God are hard to prepare for and even harder to recover from. In 2005, Hurricane Katrina devastated coastal Louisiana around New Orleans. Less embedded in our collective consciousness, though, is the havoc Hurricane Rita brought to the same region just six weeks later.

Dr. G.R. McGuirt of 20/20 Vision Clinic in Lake Charles remembers. “Our town was already turned upside down with displaced people from New Orleans,” he says. “Hurricanes pop up occasionally, but hadn’t been a problem and we had protocols. Hurricane Rita was another kind of hurricane, though.

“Before she hit, we took down all the merchandise, boxed it up and sent it home with different employees in case a shopping cart came through the window or if one person was hit we wouldn’t lose everything,” McGuirt recalls. “We stacked chairs in back, turned off the computers and stacked them high, covered in plastic to keep them from water.”

20/20 Vision Clinic’s “lagniappe” snack bar was born during crisis and lives on today.

Fortunately, 20/20 Vision Clinic suffered little damage. “No broken windows and we only got some windblown water. We just dried out the carpets and pads,” he says. That is, of course, after he was able to get back to his office. The city had not fared so well.

“The city was evacuated and closed for more than a week and it was wrecked for months,” he continues. “We had trees stacked 20 feet deep and 20 feet wide. The National Guard on the ground. We started coming back into the city a week after to check on things but there was still no electricity.”

They were closed for two weeks, which for a small business can be hard to recover from, but in a strange twist it resulted in one of 20/20 Vision Clinic’s strongest fourth quarters ever.

“I thought it was going to kill our year, but when we started back we were extra-ordinarily busy,” McGuirt says. “There was a lot of insurance money going a round. We saw all sorts of people with lost and broken glasses, foreign bodies and abrasions. We had long, full days under duress, but everyone pulled together. Business was incredibly robust for the rest of the year.”

The industry also came out to help.

“Somewhere in the two weeks, not knowing this would turn into our busiest fourth quarter ever, I was concerned about cash flow. Out of the blue, I received a call from the president of Vision Source [Glenn Ellisor],” McGuirt says. “He told me they were sending $2,000 checks to Louisiana ODs affected by the storm. Then the AOA sent $1,500. I was moved by both. It wasn’t expected, and it made a huge difference knowing we had support. Now, I’m quick to write a check when someone, especially a Vision Source or AOA doctor, has been damaged.”

But recovery had its challenges.

“It was a highly stressful time and nerves were jangled. That’s when we started having a coffee and snack bar to give people a little relief, a little respite. We call it lagniappe (a little something extra). We still have it, and it’s always a surprising delight to our clients,” McGuirt says.

Today, the clinic prepares for potential disasters differently. Their new building has an emergency generator and hurricane shutters. They keep water, food, clothes, cleanup equipment, and gasoline ready for their return.

“Cellphones have changed preparations a lot, too,” McGuirt says. “It’s much easier to communicate with and check in on employees now; it’s not just texting though, but the camera as well. When we need to evacuate, we go take a picture of all four walls in each room, a picture of every shelf, every open drawer. Pictures of every piece of equipment’s ID, make, model and serial number. Insurance pays, but only if you can prove ownership. The amount of small items adds up if you are not reimbursed. And it’s much better to take the food out of the freezer before it spoils. But take a picture first!”

“Does crap happen? It sure does. Be prepared,” he concludes.

Prev1 of 5Next
Use your ← → (arrow) keys to browse
Related Topics:
click to Comment(Comment)
Up Next

17 Things You Really Should Stop Saying In Your Eyecare Business

A Special Guest for a Special Gratitude Edition of Sanity Files