WHAT CAN ASSOCIATION with a pro sports team do for your practice? How about increased name recognition, a wealth of marketing and social media possibilities, community engagement and a cool new way to bond with existing clients. Not to mention the status boost that comes through associating with folks who are at the pinnacle of their field — and free passes to games! Then there’s the sheer satisfaction of helping people excel at what they do best. When you’re an official eyecare provider to a pro sports team, you’re telling customers, patients and your peers that you can mix it with the very best. Here are six practices that help elite athletes perform at their best, and enjoy a rare sort of branding boost in return. 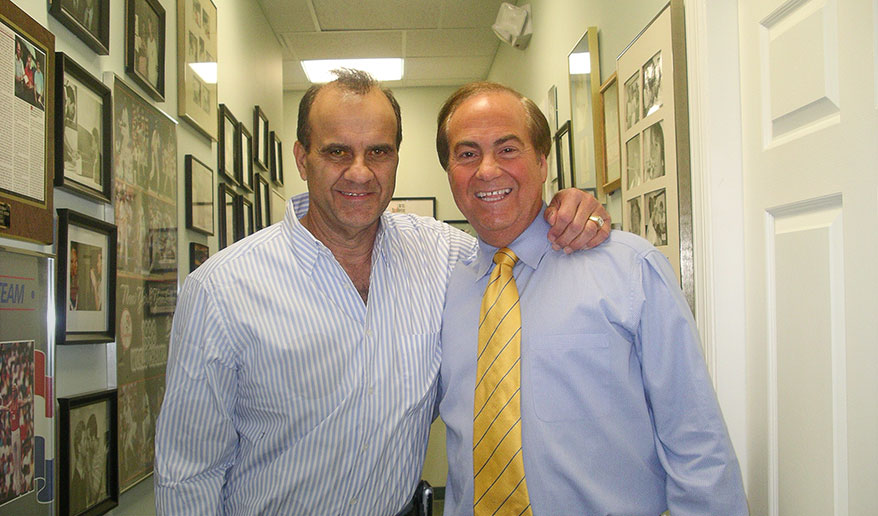 Few ECPs have as much experience working with elite athletes as Dr. Don Teig, founder and CEO of The A Team/High Performance Vision Associates, and a vision consultant to the Florida Panthers, Oakland A’s, New York Yankees and the LPGA. “I connected with the Yankees early in my career when virtually no one was providing sports vision to any team,” recalls Teig. A brief rundown of Teig’s main services includes visual performance evaluation and enhancement, visual calisthenics, visual motor skills, visualization and positive imagery training, and the provision of sports specific CLs, CRT, Lasik and protective eyewear, as well as trauma evaluation. Aside from “the professional satisfaction and joy of working with athletes of all ages and levels of excellence,” Teig acknowledges that the public relations benefits can be huge when working with high profile athletes. “It played a huge role in building my practice,” he says.

For the past two years, Dr. Alex Andrich has served as vision coach for the Cleveland Indians, a role he has also performed for the Cleveland Monsters hockey team for the past 10 years. He’s responsible for the refractive and ocular health needs of the athletes, but a big part of what he offers has to do with the visual performance aspect. Depending on the sport, he will test the athletes on up to 20 different visual performance skills, then put together a vision training plan for each individual athlete. “All athletes require core vision skills like eye tracking and eye teaming, but certain sports like baseball require really fast visual reaction and processing speeds, whereas a hockey player benefits from good central/peripheral vision integration,” he says. Andrich was already established in sports vision when colleagues were able to introduce him to the pro teams he now serves.

Florida Institute of Sports Vision staff perform an ‘in the bubble’ vision evaluation on a Miami Dolphins player under special COVID-19 guidelines.

The Florida Institute of Sports Vision, operated by The Eye Center in Pembroke Pines, FL, is the eyecare provider to the Miami Dolphins. According to institute director Dr. Amanda Nanasy, the partnership with the football team was initially fostered by members of the Dolphins’ sports medicine team who already had a relationship with the practice. Nanasy says the institute provides performance vision evaluations, vision training, sideline care, visor evaluations, concussion vision rehabilitation and other basic services for contacts and glasses/rec specs. Her team loves working with pro athletes, Nanasy says, but she’s quick to add that “I get the biggest thrill out of making a difference in young athletes’ careers; either watching them obtain scholarships to dream universities or making it to the pros. We love to cheer them on!”

Bouquet Mulligan DeMaio has been sponsoring sports teams for all of its 30-plus years in business (it started out sponsoring local triathletes). So when professional ice hockey team the Hershey Bears, a farm team for the NHL’s Washington Capitals, approached them about radio advertising it seemed a natural fit. After sponsoring some radio spots, BMD developed close ties with the Bears, and now acts as the official eyecare provider for players and staff. The Bears can average more than 65 percent of Hershey, PA’s entire population at home games and draws a large listening audience when away, spelling big-time name exposure for Bouquet Mulligan DeMaio via reads during the game, their sponsorship of penalty kills and founder Jim Mulligan’s own twice-yearly live “special guest” spots with announcers. The partnership has since migrated online, with BMD regularly giving away game tickets on their Facebook page. The practice has seen a nearly 40 percent increase in social media traffic since embarking on the partnership.

Ziegler Leffingwell Eyecare has been the eyecare provider to the Milwaukee Bucks, Brewers, Wave Soccer and pro cycling teams. It all started when co-owner Dr. Dave Ziegler happened to sit next to George Karl, then the coach of the Bucks, on a flight and told him he thought the NBA needed eye doctors courtside. A partnership was born and Ziegler was later able to parlay this contact into relationships with the Brewers and other pro teams. The lesson, says Ziegler: “Don’t be afraid to take chances and be persistent.” Ziegler’s team attended every Bucks game and was present in the locker room before and after play. The most common injury was a poked eye, treated with a bandage soft CL with topical anesthesia. Ziegler cautions that when pro teams change coaches they tend to bring in all their own people, including eye docs; so that relationship has ended, but he still takes care of the Brewers and their draft choices for routine exams.

Dr. Alan R. Boyco, owner of Image Optometry, first became interested in sports vision when growing up as an ardent Oilers fan in Edmonton, Alberta. “I noticed a sign at a large optometry practice in West Edmonton Mall stating that the proprietor was the ‘Official Eye Doctor to the Edmonton Oilers.’ That was it, I knew right then what I wanted to do for the rest of my life.” After OD school he interviewed with different sports franchises across North America and landed in British Columbia, where he started with the BC Lions, then immediately added the Vancouver Canucks and Vancouver Grizzlies. “The main services I provide are eye injury-related, and taking care of the team personnel and performing requisite triage.” Boyco says working with such high-profile athletes gave him instant credibility that really helped as a new grad. Twenty-five years later, “it’s the camaraderie in the medical room and a feeling of being part of a family that optometrists usually don’t have in our life, as we are mostly a solitary profession that suffers from 15 minute relationships.”