This Colorado Practice Chose the Power of Collaboration Over Consolidation

Check out the ways they benefited from joining a doctors’ alliance.

IT’S A DILEMMA independent ECPs face: Independence gives you the freedom to offer great service, but makes competing on cost hard. As a remedy, a growing number of them are joining one of the numerous alliances of doctors and ECPs that have sprung up in recent years. INVISION spoke with a Colorado practice whose positive experience with one such group has helped it thrive and serves as a testament to the benefits of collaboration, rather than consolidation.

Drs. Cameran Drake (right) and Jenni Drake (left), sisters, ODs and co-owners of 3D Vision Eye Care in Broomfield, CO, are an example of the power of pooled resources. Says Dr. Cameran, “We have two different brains — she’s much more business oriented, whereas I’m much more patient oriented. It works out great.” But they know their limits. “Very few of us [ODs] went to school for business, so having resources for that side of your practice is something you can’t afford not to use.” When colleagues suggested the Drakes attend one of Professional Eye Care Associates of America (PECAA)’s networking dinners, they figured it would be a way to get some CE in while rewarding staff without much cost to themselves. They were pleasantly surprised at what they found. “We ended up getting so much out of the meeting we were hooked.” 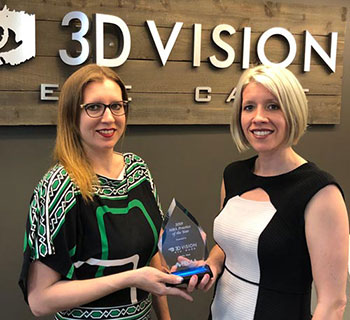 After attending a number of PECAA’s networking dinners and annual meetings, the Drakes signed up for its MBA (Member Business Advisor) program. Among other things, membership gives them access to advice on inventory and frame board management — areas the Drakes felt had been holding them back.

Whereas they would previously let opticians order what they thought was needed, says Dr. Jenni, “Having the inventory analysis gave us an idea of how to …make sure we were seeing what frames turned, what frames were profitable… and which ones we should get rid of.”

A turning point in their business came when they found an additional location that seemed promising. “We thought it was a slam dunk,” recalls Dr. Jenni, but the MBA showed them “it could have been the worst thing to get ourselves into.”

Members also qualify for unlimited telephone consultations. “When we have questions on how to bill for something, or the right codes to use, we utilize the billing/coding department. There’s no fee for that, just a quick phone call. We are also currently looking into health insurance through their alliance,” said Dr. Jenni.

The Drakes gets peace of mind knowing there is someone who specializes in any area they need help in, but who has no agenda. “You know that you can trust them as their only goal is to help you,” Dr. Jenni says. Not having to do a lot of research saves the doctors time, “which as business owners and mothers is invaluable.”

Some ODs are wary of alliances’ fees, but the Drakes cite the MBA’s input on the additional location as an example of money saved.
She cites the networking events as personal favorites. “It’s … reassuring to talk to people that are going through what you are. Once you realize that other private practices are not your competition you learn so much from collaborating with other members.”

Advertisement
Related Topics:eyecare businesses in ColoradoFeatured
click to Comment(Comment)
Up Next

Afraid to Take That Leap Into Niche Optometry? Let This Functional Vision Specialist Inspire You

A new program powered by Essilor, Luxottica and EyeMed that is designed to help your practice improve traffic, visibility and patient experience while maximizing profitability. Learn More at 360.EssilorLuxottica.com

TikTok for the Modern Eye Doc

MetLife to Acquire Versant Health, Owner of Davis Vision and Superior Vision, in $1.68B Deal

Warby Parker Gets $245M in Funding

16 Images That Show Why ‘Uptown Eyes’ in Fayetteville, AR, Was Named One of America’s Finest Optical Retailers