In the small town of Leland, NC, cutting edge eyecare and rare frames are served up with a craft beer and your favorite tunes — all in the company of a dog named Horatio. 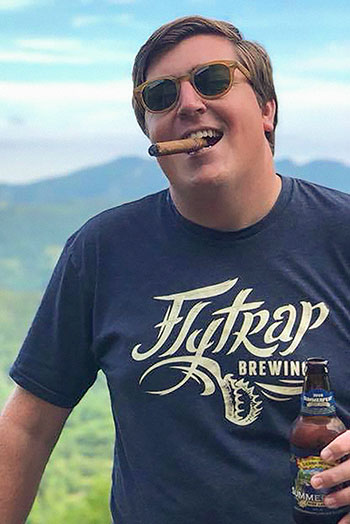 Owner Dr. Craig Scibal’s favorite patient is one that ‘comes in with their dog, has a beer and gets to know the practice while receiving exceptional eyecare and listening to great music.’

H AVE YOU EVER asked yourself who your favorite type of patient is? Or is that the sort of question small business owners are no longer allowed to permit themselves? Dr. Craig Scibal, owner of Swell Vision Center in Leland, NC, has no such qualms. “My favorite patient is one that comes in with their dog, has a beer, gets to know us while receiving exceptional eyecare and listening to great music, and then leaves excited to tell their friends about their experience.”

Clearly, here’s a practice that knows who and what it is, something its clientele — described by Scibal as “mostly newly retired happy folks from the Northeast,” seem to appreciate. Scibal and his team have pulled off that rare feat of delivering top-level patient care and eyewear while remaining true to themselves.

Swell Vision Center opened its doors cold one April day in 2016 in Leland, a small town west of Wilmington. Their first patient walked in around 11 a.m. and asked if they were open. “Admittedly shocked that somebody came in, my staff member and I were slightly speechless and stumbled upon the word ‘yes.’ Since that day, Swell has continued to grow, with most of our advertising and marketing being word of mouth.”

In high school, Scibal worked for the private practice his dad owned for about 25 years in Morehead City, NC. He later worked at Elite Vision Care, a private practice in League City, TX, while attending optometry school in Houston.

“I knew that I wanted to be in Leland, NC, based on the growth it had seen,” says Scibal. Thanks to the huge influx of retirees southeastern North Carolina has seen in recent years, Brunswick has been the fastest growing county in the state since 2015. “The area really only had one other place for eyecare, so I figured I’d try to get in early before it became too saturated.”

Swell has made a point of offering all the latest technology and frame lines, carrying mostly independent eyewear brands that are unique to the area. “We’ve tried to shy away from having eyewear that can be purchased everywhere around town and I think patients enjoy it. Not only do patients appreciate it, but staff really appreciate it when they can tell you’re invested in the practice, so it’s a win-win.”

Dr. Scibal knew he wanted to be located in Leland, NC, based on the growth the town has seen in recent years, largely thanks to retirees.

According to Scibal, the office was designed so that somebody would come in and feel at home — not at a doctor’s office. Using a lot of neutral colors, polished concrete, metal and brick, the office design relays a relaxed and professional atmosphere. The office is split into a front half consisting of a reception desk/area and optical boutique, and a back half consisting of the pretest/exam/and contact lens area. The two are separated by frosted glass barn doors that create a modern feel with a comfortable, homey twist. Candles and oil diffusers enhance the olfactory experience.

Visiting Swell is a bit like calling on that one friend who puts you to shame by being such a thoughtful host. The idea, Scibal says, is that from the moment a patient calls the practice, they start to wonder if they are even talking to a doctor’s office. “With questions like, ‘What would you like to drink upon your arrival — water/beer/wine/soda/tea/coffee?’ to ‘Are you cool with dogs?’ to ‘What kind of music do you like?’ the patient realizes this isn’t just another office.

Little does the patient know, every answer they give is written down and studied by the staff prior to their arrival.” When they turn up, their favorite drinks and music are waiting for them. (See Five Cool Things on page 71).

The personable approach carries over to Swell’s online presence. Says Scibal, “I think your website should be quick, clean, and informative. For a lot of people, it is the first impression they’ll get of your establishment and brand.” Swell’s site incorporates professional images of the office, logos of the eyewear, and information on the staff and the doctor. “So in that sense, I see our website as all three.” Possibly due to the demographic, Scibal doesn’t see social media as much of a sales channel or foot traffic driver, posting once every few weeks or so, mostly highlighting a new frame line, staff introduction post, or a funny optometry meme.

“I am nothing without my staff,” admits Scibal. The first interaction with Swell Vision Center is typically with the thick British accent of the receptionist, Helen. “She truly defines customer service and makes every single person feel comfortable and feeling like they want a ‘cup o’ tea.’ Both of the opticians/technicians are cross-trained and can float amongst the office performing any task as needed. Both are genuinely excited about eyewear and typically rub off their excitement on patients.”

1. PARTY TIME. Every time Swell gets another 100 5-star Google reviews, they throw a staff party, ranging from axe throwing to Topgolf.

2. TUNE IN. Upon entering the exam room, patients hear the music they requested during their appointment call, streaming at 50 percent volume so they hear it immediately, then a bit lower once the exam gets underway.

3. LOCAL BREWS. Swell is constantly rotating its craft beer selection with local breweries. With the craft beer industry booming in the area, it adds local flavor to the experience.

4. SLICE OF LIFE. Every year, Swell sponsors the photo booth at the local Children’s Museum. The event, called ‘Pizza Putt,’ converts the entire museum into a putt-putt course and brings in local pizza vendors and breweries.

One of the most important members of the team at Swell is Horatio (full name Horatio Fizkin Scibal), a “very well-behaved, found in a trash can, beautiful rescue dog who is the official greeter,” according to Scibal. He greets each patient at the entrance, follows them through pre-testing and the exam (he has a bed next to the exam chair), and helps them pick out eyewear. Since the day Scibal rescued Horatio in 2014, “he has been the most gentle and loyal dog I’ve ever known.” When a new patient calls to set up an appointment they are always asked if they mind having a “sweet pup named Horatio” roaming the office at their appointment. “In 3.5 years of being open, we’ve probably had less than 10 patients say they’d prefer him not to be there,” says Scibal. Horatio features prominently in marketing material, and behind the front desk there’s even a painted portrait of him at the phoropter getting his eyes checked.

Related Topics:eyecare businesses in North Carolina
click to Comment(Comment)
Up Next

Omeros Sells Omidria to Rayner Surgical in $1B Deal

If Staff Find Out How Much This New Hire Is Making, There’ll Be Trouble …