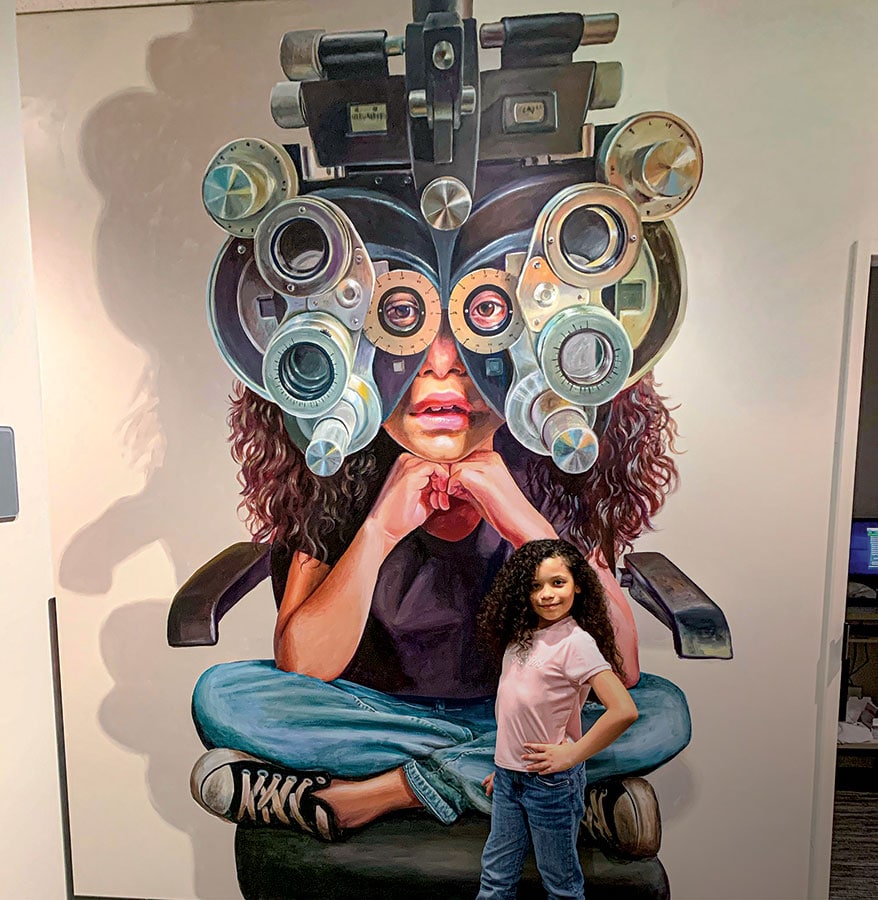 WHEN ROOSEVELT VISION in Seattle, WA, relocated in April 2019, one of their plans for the new office was to find locally sourced art that spoke to their clientele and was relevant to optometry and the practice’s 70-year history. They stumbled upon one artist who happened to tag Roosevelt Vision on Instagram after posting a sketch he’d dashed off while visiting as a patient. (A collection of works depicting optometric equipment commissioned from David Hingtgen now adorns a wall at the practice — check them out at RVS’s website: invisionmag.com/112001.) But doctors and staff agreed the empty wall at the back of the optical needed something. The question was what to do with such a large space. It was after one of the doctors attended a chalk art show in Redmond that a very cool answer presented itself.

The doctor’s photos led to a consensus that a mural would fit the bill beautifully. Recalls Roosevelt Vision CEO Barbra Dey: “We were attracted to a particular artist from out of state, and she recommended Naomi Haverland, who at the time was living in Seattle. We were very excited to have a local artist involved, since Roosevelt Vision is all about supporting the community. We gave her our ideas — we wanted something that said ‘Seattle’, ‘glasses’ and ‘everyday people.’” Haverland worked with optical manager Jeff Brooks and together they came up with the concept. Dey gives a special nod to Brooks for communicating to Haverland the practice’s vision for the project: “The final murals are a credit to his ability to clearly portray what we wanted.”

The office had a number of aims in commissioning the first mural, says Dey. “We wanted our new space to look warmer and welcoming. We wanted to feature a local Seattle artist and support our artist community.”

Haverland was given concepts to work with and came up with the specific ideas for the paintings herself. Roosevelt staff collaborated on the concepts and narrowed them down until they came up with images everyone knew would work.

The first mural shows a young woman wearing glasses gazing through a window, raindrops dripping down the pane. “Very Seattle,” Dey observes. Photos don’t do the scale of the mural justice: it takes up an entire wall in the optical department and can be seen from the front door. It was created during opening hours, creating a lively conversation with patients while Haverland was working.

The aim of the second mural, which shows a young girl peering through a phoropter (Roosevelt employee Samantha Leavell’s daughter Sa’Maaria gamely agreed to serve as the model), was to create a talking piece and to involve a member of staff in a fun project. Work on the second mural began after closing one Friday and was completed over the weekend. Haverland finished the final touch-ups on the Monday during work hours but was able to keep a small footprint and did not interfere with patient flow.

“The practice looks great,” says Dey, summing up the impact of commissioning the murals. “There is a feeling that we are finally home in our new space now that both these murals are complete. We have had such positive feedback from our patients and staff. Everyone loves talking about and answering questions about the mural, the artist and the models.” She adds that Haverland, too, is delighted with the outcome. “She really enjoyed working with our team. I’m delighted that we have had an opportunity to share her name and her work with many different businesses in our community, through verbal referrals to patients who come in for their eye exam.”

Do It Yourself: Commission a Mural for Your Optical

Want an Online Following that Translates into Foot Traffic?

Think You’re Having a Bad Day? ECPs Told Us Their Biggest Screwups

Prevent Blindness Declares December as ‘Give the Gift of Sight Month’

Check Out These 17 Eye-Catching Optical Murals