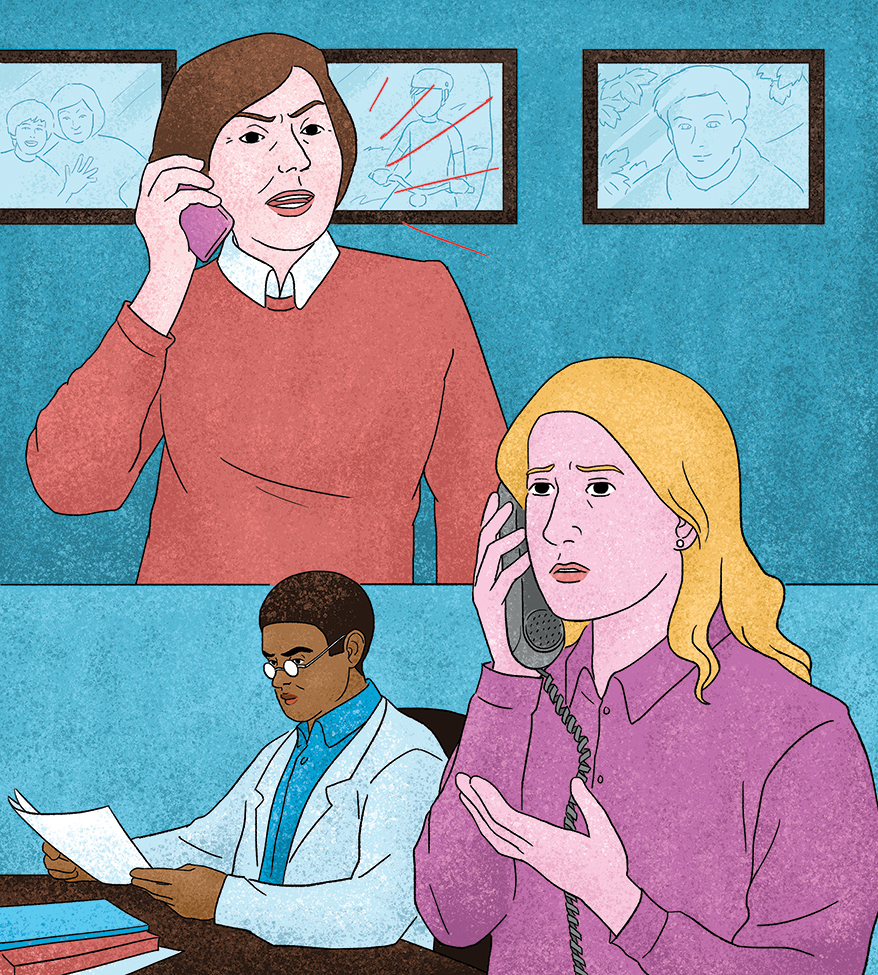 JILL WAS OPENING up the office and her last task was listening to the voicemails. One of them was from a spicy parent calling about her son’s eye exam. She would need to talk to Dr. Jackson about this one.

“Dr. Jackson, I had a voicemail from the mother of your patient, Nick Morris, whom you saw a few days ago. She was not here during the exam and was a bit annoyed that we had not called her to fill her in about what happened with her son’s eye exam.”

Real Deal scenarios are inspired by true stories but are changed to sharpen the dilemmas involved and should not be confused with real people or places. Responses are peer-sourced opinions and are not a substitute for professional legal advice. Please contact your attorney if you have any questions about an employee or customer situation in your own business.

Carissa Dunphy has been working in private practice optometry since 2008 and is the founder of Optician Now (opticiannow.com). Follow Carissa on Instagram and Facebook at @opticiannow.

As Dr. Jackson pulled up Nick’s medical record in the computer he summarized out loud to Jill, “It looks like her son is 16 years old. The technician noted that he came to his exam without a parent and that he was not familiar with any of his own or the family’s medical history. We did not dilate him because we didn’t have a parent or guardian’s permission, nor did we do the retinal imaging—probably because he is 16 years old and he had no way to pay for it.”

“Do you want me to call her back?” Jill asked.

Dr. Jackson responded, “Yes, please tell her what I just said and that her son has no abnormal findings and she can request records if she would like, but that it’s best to come to appointments, especially since her child is a minor.”

Jill called her back and told her what Dr. Jackson said. Ms. Morris thanked her for the callback and that was that. Or so it seemed.
Three weeks later Jill approached the optician, Bri, and said, “I have a patient’s mom that would like a call back.” She continued, “She was pretty pissy when I talked to her and she wants to know why no one has called them yet because her son’s glasses should be here by now.”

“I don’t think it matters but Nick is only 16 and he came to his exam without a parent… and this isn’t the first time we’ve heard from his mom,” Jill added.

“Most kids who are still on their parents’ insurance plan don’t pay for glasses, the parent does.”

Bri shook her head, “Aaand most kids still on their parents’ insurance plan get the deer-in-headlights look on their face the moment you start talking about ordering glasses.”

Jill responded, “Would you look him up so we can get his mom an answer? His name is Nick Morris.”

Bri pulled up Nick’s electronic medical record and saw that there was no order for glasses in process. “He has no order going for glasses. When I look at the employee activity log I don’t see that any optician even pulled up his chart on the day of his exam.”

“So I already had to call her about her son’s eye exam and now I have to call her back and tell her that he doesn’t even have an order going for glasses?” Jill concluded, “I can’t wait!”

No minor is seen without a parent present. No exceptions.

Usually, the doctor is the one that will give the final say on what to do with the minor child. If they feel comfortable seeing the patient without a parent/guardian then we will continue to see them. Paperwork usually still has to be signed by someone 18 or over because it does state they will assume financial responsibility.

The doctor will still dilate the patient as long as we have had the form signed and gotten a verbal OK from a parent/guardian that the patient is alright to be there without them.
Glasses are not to be ordered without payment and all of our patients are usually pretty good about understanding that. We will call them to let them know and also send a bill with the minor, which is told to them as a quote until payment is made. Although most times they don’t tell it to anyone in that way or at all.

The doctor makes the call about the exam. If there’s any doubt, staff can call the parent/guardian, but ultimately the doctor makes the call. A minor should never be dilated without parent or guardian consent. Personally, I don’t dilate teenage drivers; it’s too risky. As the great Dr. Classe taught me at UABSO, always conduct and document your exam as if you will have to defend it in court. I’ve been an expert witness so I know from experience. As for any special testing, you must have guardian consent. If they aren’t present, don’t do it. Eyeglass orders are for the parent/guardian, unless the young patient is paying cash/their own money. That’s risky too, because the parent can always claim the minor didn’t know what they were doing and ask for a refund.

We don’t see minors unless a guardian is present or available by phone; we don’t use any drops on a minor until guardian approves.

If you’re the owner or top manager of a U.S. eyecare business serving the public, you’re invited to join the INVISION Brain Squad. By taking one five-minute quiz a month, you can get a free t-shirt, be featured prominently in this magazine, and make your voice heard on key issues affecting eyecare professionals. Good deal, right? Sign up here.

How Can These Conflicting Co-Owners Get on The Same Page?

How Would You Accommodate a Low-Income Patient Sensitive About Poor Treatment, but Unable To Pay For Glasses?

Carissa Dunphy, ABOC, has been working in private practice optometry since 2008. She is the founder and editor-in-chief of Optician Now (opticiannow.com) and recently launched opticalgifts.com. Follow Carissa on Instagram, Facebook and Twitter at @opticiannow.

Prolific Shoplifter Gets 4-Year Sentence After 1000-Plus Thefts: “We Build Prisons for People Like Him”

Eyezen® Kids Lenses: Designed for How Children See the World