FOOTBALL ICONS, RECLUSIVE troubadours, presidential candidates, Hollywood A-listers, and childhood heroes: We asked our readers to indulge in a little shameless bragging and tell us about some of the famous faces that have propped up their eyewear.

“The day Gene Hackman stopped in I happened to be off,” recalls Rick Rickgauer of the day the bona fide Hollywood legend strolled into a LensCrafters in Tuscon, AZ. (Rickgauer has since moved on to Vision Associates in Girard, PA.) “My lab manager called me to tell me Mr. Hackman was in the store. ‘If I drive all the way down there and you’re lying to me,’ I told him, ‘I’ll $#@* you over good.’ So, I hopped in my car and drove the 30 minutes to work. And there he was, all 6’4” of him in all his star quality. I’ve seen Gene Hackman in more movies than I can count. I don’t know what I expected of him, at the time, but he was the most mild-mannered person. Totally oblivious that he was a major motion picture star.” But it was baseball legend Ken Griffey Sr. that left Rickgauer nearly speechless. “I was a bumbling idiot. In the mid-’70s I was a huge Cincinnati Reds fan when they were known as the Big Red Machine, winning multiple World Series along the way. Ken G was a big cog in that machine. His son, Ken Griffey Jr. was all the rage. One of the best players ever to play the game. I proceeded to tell Ken G that, to me, he was the original Ken Griffey, not his famous son.” In retrospect, Rickgauer wonders if it would’ve been better if he had been speechless. “To this day, I still feel like an idiot for saying that.” 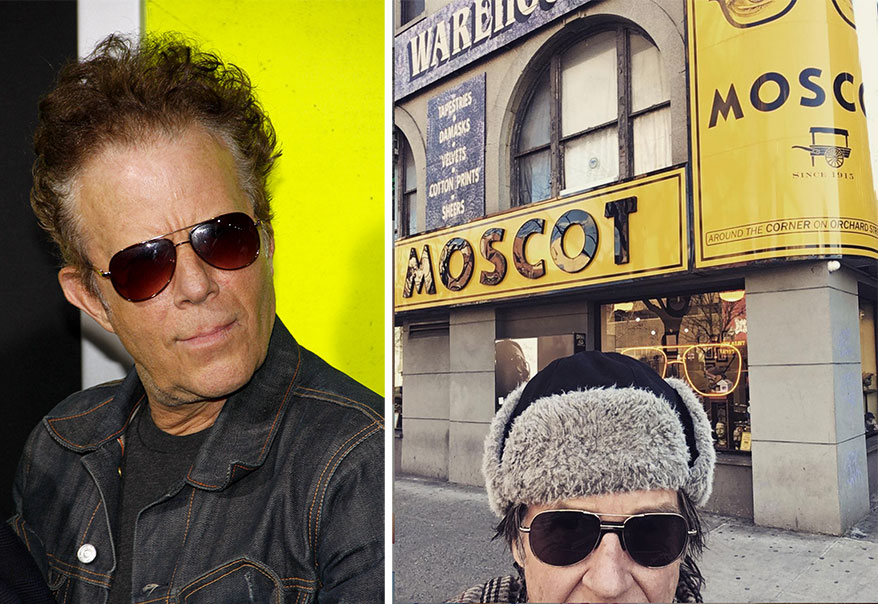 Nancy Revis, owner of Uber Optics in Petaluma, CA, had heard that singer/songwriter, actor, and one of her personal heroes, Tom Waits, a resident of neighboring Occidental, was often spotted in her town. “Why was he not coming into my shop?” she asked herself. “I have the cool eyewear and he has cool taste! Tom Waits always has cool eyewear on!”

Then about seven months ago, Revis and staff members Jess and Elizabeth were having what they thought was a regular workday. “Elizabeth was closing a sale at the computer desk and in walks a woman, a younger woman — her daughter — and Tom Waits! I instantly started sweating. It was actually happening — Tom Waits was walking into my store. Everything seemed to slow down and I started to sweat.” Revis managed to get a greeting out, and “Tom went right over to the sitting area and just chilled out. He was watching me help his wife and giving feedback. Nodding only. He looked so cool. Crazy huge grey curly hair. I offered him water but he declined. He sat there and grabbed a Rolling Stone. I mean… Tom Waits was sitting in my store and reading a Rolling Stone. Jess hadn’t seen that he was in the shop because she was checking in jobs. I walked to the back and all I said was… ‘Oh my God! Oh, my God! Oh, my God!’ and then walked back out. She came out and her facial expression said, ‘HOLY S**T!’ His wife loved cat eyes and so do I … so, I ended up selling her an Oliver Peoples that I wear… the Marienella in black.”

Musicians seem drawn to Uber. Revis recalls John McCrea, of the band Cake, as being “so super cool. I asked if he would model for me but he didn’t want to. But, I was so stoked that he bought glasses from me. He was hilarious and sweet.” And she has struck up something of a friendship with actor and pioneering punk rocker John Doe of the band X. “He became my customer the moment I opened because Pat with Moscot was his friend… he sent him a pair of glasses and I was the liaison. He let me take his photo wearing Moscot on a few occasions. Just recently he was in town performing with the Psychedelic Furs and swung in to say hi. He fell in love with a pair of sunglasses and modeled them for me. I told him to let me take his photo wearing the sunglasses that he loved… He sent me a pic of himself in NYC wearing the Moscot sunglasses.”

As an Army veteran, William Chancellor says it was a personal pleasure to sit down and dispense to Herman Cain, the former presidential candidate from the Atlanta area, who has a history of offering praise and support for the military. (The experience took place at Chancellor’s previous office, DePoe Eye Center, which has several Georgia locations. He is now the practice manager and licensed optician for Eye Can See Eyewear in McDonough.) “Having the pleasure of meeting him in person was a wonderful experience. He was very humble and authentic. Who can’t appreciate his quote, ‘Success is not the key to happiness. Happiness is the key to success. If you love what you are doing, you will be successful.’” Chancellor recalls dispensing Silhouette Eyewear to Cain. “I would listen to his syndicated talk show daily and supported him in his bid for the White House in 2012.”

Jupiter, FL, is home to a disproportionately high population of sports pros. Not surprising, then, that Julie Uram often looks up to find former football players stooping to squeeze through her doors. “Well, it seems as though I have many retired football players or coaches [coming in]: Joe Namath, Ron Wolf and Dan Henning. Funny story about Joe Namath, the other day a customer recognized him and asked if he would speak to his brother on the phone. Joe did and told him when he was in the area they should get together! Then the guy was all excited, and Joe said, ‘Oh, I was really just kidding…’ It was quite a funny moment.”

The Atlanta area now rivals Southern California as a center of the U.S. film industry. So much so that these days you’re as well positioned in the Peach State as on Rodeo Drive for superhero sightings. Ask Dr. Tom Brillante of Decatur Eye Care in Decatur, GA — or at least ask his employees. He spotted Cress Williams of The CW’s Black Lightning. “I didn’t know who he was, but the rest of my staff did. Such a nice guy! For a superhero, I expected him to be a lot more arrogant. Maybe his other super power is humility.” Kevin Bacon and Billy Bob Thornton filmed a part of their indie film Jayne Mansfield’s Car right downstairs in the courtyard. Most recently — and most personally thrilling for unashamed retro-soft rock fan Brillante — was his brush with Peter Olson, one of the lead singers for “the greatest ’70s/’80s cover band of all time — Yacht Rock Revue. Definitely check them out, they tour the country throughout the year and I’ve probably seen them about 10 times now,” Brillante says.

How 6 ECPs Designed, and Use, Their Business Cards

When Their Tech Lets them Down, These ECPs Have Things Covered

In Theory Eyecare Can Be Done Anywhere. ECPs Share Where They Would Like to Live … In An Ideal World