What Is It Good For?

Absolutely nothing, it turns out. At least when it comes to the treatment of glaucoma. The long held belief that marijuana is beneficial for glaucoma patients is about as accurate as the idea that eating Pop Rocks and drinking Coca Cola at the same time will make your head explode.

It sounds good, but it’s just not true. Marijuana can lower eye pressure, but experts have found recommending it for the treatment of glaucoma doesn’t make sense due to its side effects and its short duration of action.

Don’t feel bad if you didn’t know. You’re not alone. Even states that have legalized medicinal marijuana include glaucoma as an approved condition, despite the fact that experts know it’s not the most effective treatment. Many Americans, including lawmakers, don’t listen to experts. They listen to constituents … and celebrities. Whoopi Goldberg, for example, has a vape named Sippy, which she uses to treat her glaucoma.

“The vape pen has changed my life,” Goldberg said in The Cannabist.

“With each sip comes relief — from pressure, pain, stress, discomfort.”

That may be the case. But experts say the short-term relief a patient may experience from marijuana isn’t enough to justify the long-term damage. Doctors simply do not endorse it. Not here, or to the north. The Canadian Ophthalmological Society (COS) policy statement on the use of marijuana managing glaucoma from 2010 clearly states “the clinical utility of marijuana for the treatment of glaucoma is limited by the inability to separate the potential clinical action from the undesirable neuropsychological and behavioral effects. The COS does not support the medical use of marijuana for the treatment of glaucoma due to the short duration of action, the incidence of undesirable psychotropic and other systemic side effects, and the absence of scientific evidence showing a beneficial effect on the course of the disease.” 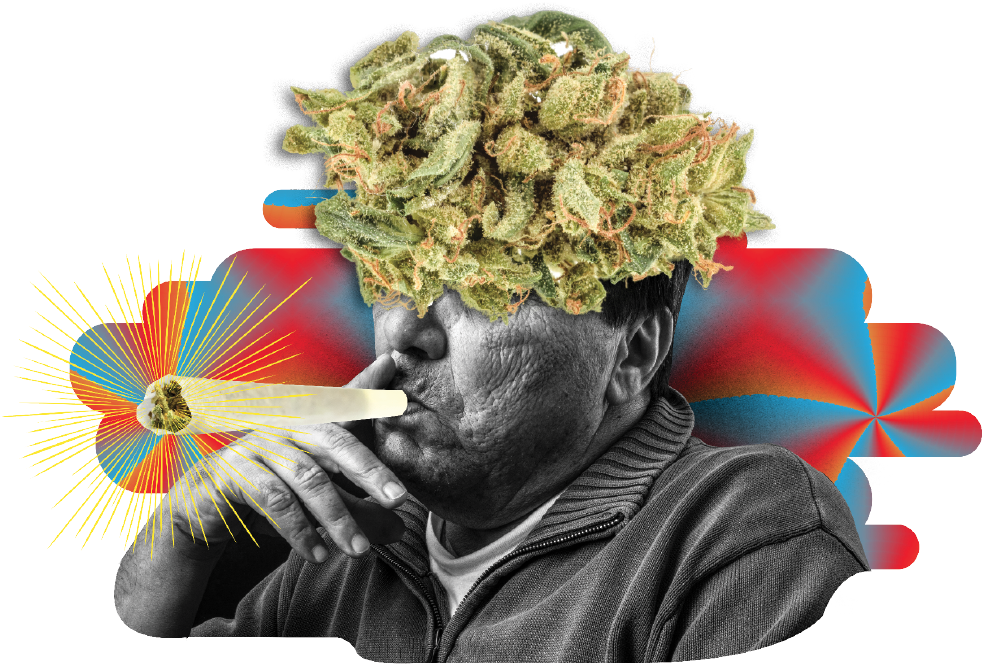 In an interview with INVISION, Colorado’s Dr. Bob Prouty of Insight Vision Group, called the Canadian policy statement a guide for policy in the United States. But despite this country’s fascination with healthcare in Canada, no one is following that lead. “I believe it would be very valuable for the American Optometric Association (AOA) to consider issuing a similar policy statement as well,” he says. “As of November 2016, over half of the U.S. states have approved medical marijuana and four of the five states with marijuana decriminalization on their ballot approved it.”

You can trust Dr. Prouty. He’s the author of a lecture entitled “Dude, can you prescribe marijuana for my glaucoma?” And his dad was a cop.

“My father was a policeman so I never grew up smoking marijuana. Never participated. Even now that it’s legal. I don’t have an interest to partake. Still, I get asked about it all the time. Right after we (Colorado) got medical marijuana approval I was asked a half-dozen times a day.”

Many of his patients are surprised to hear marijuana doesn’t help glaucoma. The myth was likely born after studies in the 1970s showed marijuana may lower intraocular pressure for three to four hours. However, patients who suffer from glaucoma are supposed to lower their eye pressure 24 hours a day. As such, researchers estimate one would need to smoke a joint eight to ten times daily to achieve this relief.

“They’d be stoned off their gourd all day,” Dr. Prouty says.

The traditional treatment for glaucoma — eye drops — are effective and only need to be used once daily. Laser treatment and microsurgery are recommended if the drops fail. But that’s the exception, not the rule.

“In this country predominantly the initial treatment is the eye drops. They’re very effective. That’s why cannabis is not thought of as effective choice. One drop, once a day and you get a 30 to 50 percent pressure decrease reliably.”

None of these facts will matter to a patient hell-bent on self-medicating with weed, even if they know it’s not helping their glaucoma. So, what’s a responsible practitioner like you to do when trying to dissuade a patient from smoking weed or enjoying edibles? A study published last year in Jama Opthalmology found regular marijuana use — smoked or ingested — can damage vision.

Regular cannabis use delays the processing of visual information at its very beginning, in the retina, according to the study.

“Such an anomaly could be imperceptible for cannabis users,” wrote Dr. Vincent Laprevote, lead author of the study and a physician at Pole Hospitalo-Universitaire de Psychiatrie du Grand Nancy in Laxou, France. “However, it is important, since it could reflect the changes in the communication between neural cells implied by regular cannabis use. We have now to verify if this delay is also present in later stages of visual processing in the brain.”

If it is, patients who regularly use marijuana may suffer from impaired vision and reduced reaction time.

The study is not the last word on the subject. As marijuana moves from illegal drug to decriminalized medicine, more and better studies will inevitably come to light.

However, the belief that links marijuana to glaucoma relief has been resoundingly debunked. Sorry, Ms. Goldberg. Even a vision myth shared by someone who stars on “The View” is susceptible to good science.

Like same-sex marriage, the country’s resistance to medical marijuana use has evolved. A 2017 Quinnipiac poll found national support at 93 percent.

Medical cannabis has since spread throughout the country, but it is still a prohibited substance at the federal level by way of the Controlled Substances Act of 1970. The feds have — so far — looked the other way. States with pot-friendly laws were emboldened on this score in December 2014, when the Rohrabacher–Farr amendment was signed into law, prohibiting the Justice Department from spending funds to interfere with the implementation of state medical cannabis laws.

That’s sure to make medical marijuana supporters  exhale with relief. As the late, great comedian Bill Hicks said: “It grows naturally on our planet. Doesn’t the idea of making nature against the law seem to you a bit … unnatural?”

ECPs Tell Us Their Side Gigs

RestoringVision Is Fundraising on Giving Tuesday