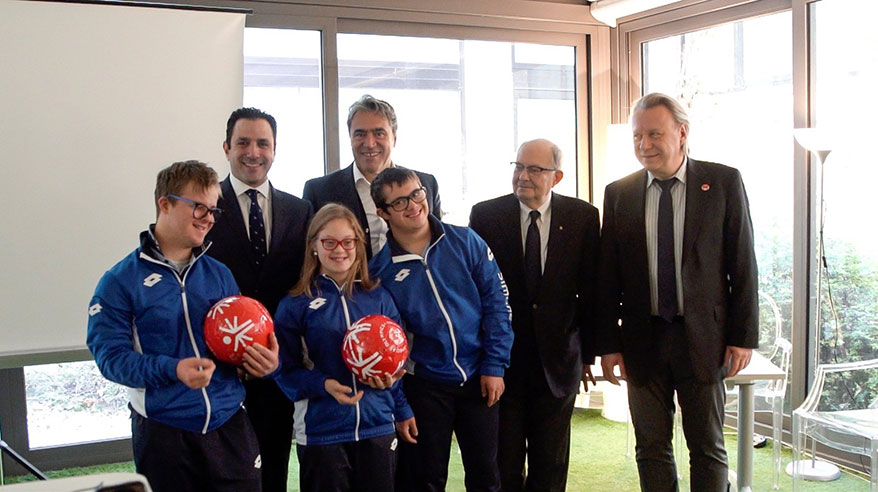 (PRESS RELEASE) PADUA, ITALY – Safilo Group, a worldwide leader in the design, manufacturing and distribution of eyewear, has re-committed its longstanding support to Special Olympics, the global non-profit organization dedicated to transforming the lives of people with intellectual disabilities.

The groundbreaking global partnership between Safilo and Special Olympics dates back to 2003. Over the past 15 years, it has led to over 1.2 million optical frames and sunglasses being provided to Special Olympics athletes as part of the Special Olympics-Lions Clubs International Opening Eyes eye health and vision screening program.

This partnership renewal comes as a highlight in a momentous year for the Special Olympics movement, which is celebrating 50 years of tackling the inactivity, stigma, isolation and injustice that people with intellectual disabilities face worldwide.

The announcement of the new three-year commitment was made at Safilo’s headquarters in Padua, Italy. It will see an annual donation of over 60,000 optical frames and sunglasses as part of the Special Olympics vision screening program. The Special Olympics global health platform, which is made possible through the support of the Golisano Foundation, Lions Clubs International, the United States Centers for Disease Control and Prevention, and various additional stakeholders, includes the Opening Eyes vision care program. It provides Special Olympics athletes with vision examinations, prescription eyewear and valuable referrals for follow–up care. Safilo is a global supplier of the program.

In addition to the critical donation of optical frames and sunglasses, Safilo personnel will continue to take an active part in the implementation of the Special Olympics-Lions Clubs International Opening Eyes events as volunteers, donating their time and expertise for the benefit of Special Olympics athletes and those with intellectual disabilities.

“We’re very proud to renew the partnership with Special Olympics, first signed more than 15 years ago, thereby confirming our efforts to bring primary eye care screenings and eyewear to Special Olympics athletes around the world,” said Angelo Trocchia, CEO of Safilo Group. “As we know, 2018 is a jubilee 50th anniversary for the global Special Olympics movement. Being such a longstanding supporter of Special Olympics is a great joy and honor for Safilo, and marks once again our commitment to eye health programs that will have an important impact on millions of lives globally.”

Opening Eyes, part of Special Olympics Healthy Athletes public health initiative, is the largest program in the world dedicated to providing vision care for people with intellectual disabilities. Since its inception, 410,000 exams have taken place with 215,000 prescription eye-glasses being prescribed. The Opening Eyes program also provides sports protective eyewear for athletes who train and compete in contact sports.

Founded in 1968 by Eunice Kennedy Shriver, Special Olympics is a global inclusion movement that uses sport, health, education and leadership programs every day around the world to end discrimination against and empower people with intellectual disabilities. The movement has grown to more than 6 million athletes and Unified Sports partners (athletes without intellectual disabilities) in over 170 countries.

Doing Monochrome in Style, These 9 Suns Are Truly Solid Choices

Change Is Inevitable; Make the Most of It