This simple fact has spawned a small industry over the past several decades that purports to improve batting performance by teaching players to see more clearly, track the ball more accurately and improve their hand-eye coordination. Yet the effectiveness of these methods has remained largely untested by rigorous scientific methods.

In response, Indiana University researchers at the IU School of Optometry, in collaboration with the Duke Institute of Brain Sciences, launched a collaboration last year to study vision training in baseball.

The players in the study are members of the IU baseball team under head coach Jeff Mercer. The lead researcher on the project at IU is Nicholas Port, an associate professor at the IU School of Optometry.

“You’re trying hit a round ball with a round stick — when that ball is traveling at 70 to 90 miles per hour at a distance of 60 feet — so, presumably, vision is important in baseball,” Port said. “What we decided to do was design a study to see whether, in a systematic and scientific way, we could measure the effects of vision training on baseball performance.”

To conduct the study, Port recruited players from the IU baseball team to participate in 30-minute exercises at least three times per week for nine weeks. Lyndsey Ferris, a Ph.D. student at the IU School of Optometry, also joined the project to lead data collection.

“We really tried to tailor our tests to the players’ strengths and weaknesses, so they were constantly challenged to get to that next level of improvement,” said Ferris, who is also a member of the Air Force. “The general feedback from the players has been very positive; they oftentimes ask to get another round of a particular activity.” 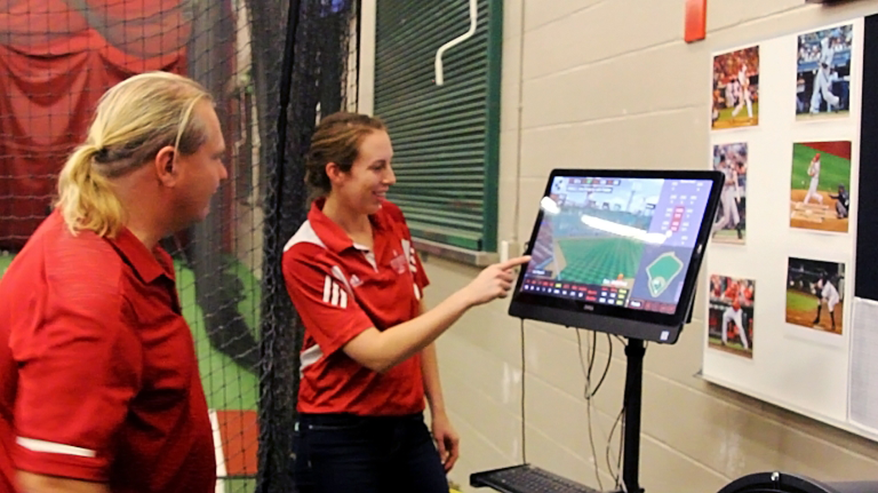 These tests include three main exercises:

The players also participated in a week of baseline tests before the main study. They took up to 500 swings to gauge their starting batting consistency and performance. For the parts of the study involving swinging a bat, the players’ form was recorded by cameras that captured the physics of each motion.

These tests were conducted at the Dr. Lawrence D. Rink Center for Sports Medicine and Technology, which is the recently constructed facility at the south end zone of IU’s Memorial Stadium, and the batting cages in the baseball complex at Bart Kaufman Field.

As a first baseman at Wright State University, where he also served as head coach before joining IU in 2018, Mercer is familiar with the challenge of striking a moving object in flight. He said the ability to make out the smallest details, such as the placement of the hand on the ball as it leaves the pitcher’s grip or the spin of the ball as it proceeds over the plate, can provide players with critical information in the heat of the moment.

“Being an offensive player myself in my career, I understand the importance of vision,” he added. “So, when someone came up to me to talk about potentially helping improve (our players’) vision and their ability to recognize moving objects more quickly, and hopefully increase their hand-eye-coordination … it was a no-brainer. Being at a university with the capabilities and the research opportunities (of IU), it’s a tremendous advantage.”

Port and Ferris plan to conduct a second round of data collection in the fall, after the whirlwind of the college baseball season is over. They also plan to enroll women from the IU softball team in the study’s second phase.

Port’s collaborator and the lead researcher on this study is Greg Appelbaum, an associate professor of psychiatry and behavioral sciences at the Duke University School of Medicine. The research is supported by a grant from the U.S. Army Research Office.

Add Some Slop to Your Day and More Tips for December

This Kansas Couple — She’s an OD, He’s a Dentist — Offer Vintage Service in a Location To Match