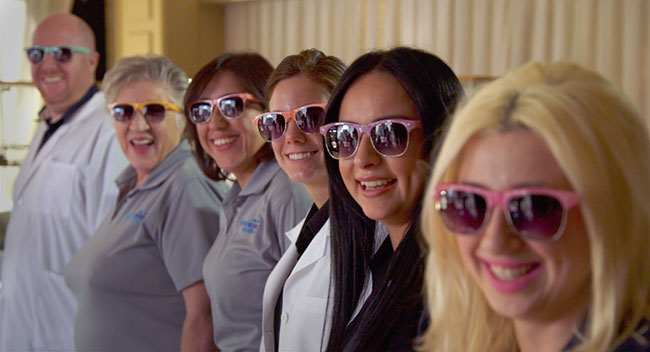 Dr. Dodge (at far left), staff and patients are all smiles in a heartfelt video that showcases his practice’s caring attitude.

Dr. Lee Dodge says he didn’t want to be seen as a “cold, stern eye doctor who sits around in a white lab coat just trying to make money.” So together with his patients, he made a short video that not only humanizes his practice, Visualeyes Optometry in Sherman Oaks, CA, but helps it stand out.

This article originally appeared in the January 2016 edition of INVISION.

THE IDEA: Eyecare pros have many marketing options, but few tools can show the character of a business like a well-directed, professionally edited promotional film. Just ask Dodge. His practice is located just outside of Los Angeles, where there’s no shortage of folks who work in the entertainment industry. One of Dodge’s patients, TW Miller, has been a writer and producer for promos of shows including Modern Family, and he is also a filmmaker who directs promo videos for small businesses. Miller wanted to build his demo reel for the latter role, so he offered to produce a film about his eye doctor as a “passion project” for free.

The video proved an opportunity for Dodge to showcase his services and explain his profession without the usual cost. “What I keep hearing from patients is that when they watch the video, they understand optometry more and that we’re performing a full comprehensive exam, not just refraction,” Dodge says. “Everything shows up in the eyes, so they understand the impact we have.”

THE EXECUTION: Thanks to a crew of film industry professionals who donated their time to help Miller with the project, filming took just full two days and editing took about a week. But before production could begin, Dodge needed to recruit a few patients who weren’t shy in front of the camera. 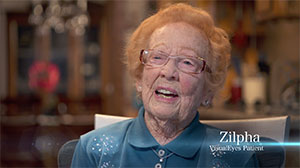 The VisualEyes video features the stories of numerous patients of the practice.

“(Miller) asked me for a list of people who would be candidates, and he wanted a variety of ages and ethnicities,” Dodge explains. “It was very difficult because I have a lot of good patients and didn’t know who to choose.” So he kept it simple, asking patients who recently had appointments if they would appear in the film.

The result was a two-minute, 10-second video that immediately hooks viewers with footage of Dodge saying, “So I was taking a look at her eyes and something just wasn’t right.”

The next scene shows him reading a letter, “Dear Dr. Dodge, you saved my life, and I want to thank you.” After that, the video features everyone from a young patient who enthuses, “He loves what he does and you can tell,” to a 100-year-old woman who still drives herself to her annual exam.

THE REWARDS: Dodge published the video on his YouTube channel — see it at invmag.us/drdodge — and features it on his practice’s homepage. It’s also on Miller’s website at twmiller.com, titled “The Optometrist.”

Though Dodge says it took time for the video to gain traction, it’s now accomplishing exactly what he hoped it would: attracting more patients by giving them a perspective of the practice they wouldn’t have gotten otherwise.

“We’ve had tons of positive feedback, and the response is growing,” Dodge says. “Patients want to know that they can trust their eye doctor before they go to the appointment.” And with this video, people can see that Dodge cares about their overall health, giving them confidence they’ve made a good decision.

Tell Your Story on Video

How to create multimedia that motivates

➤ Remember, you get what you pay for. If you want your business to be represented in the best possible way, hire the best videographer that your marketing budget allows.

➤ An effective promo video doesn’t drone on about frames and refraction. Miller says to hire a videographer who understands how to “reveal the human beings behind the storefront.”

➤ Before the cameras roll, spend time identifying the video’s strategic goals — and be sure the script conveys your business exactly how you want it to.

➤ Be patient and flexible. Filmmaking takes longer than you’d expect. Trust your videographer and be willing to invest the time necessary to make the best video possible.

➤ Your promo video is good only if people watch it, right? Share it on multiple social media platforms, and if your business doesn’t have a YouTube channel yet, start one.

Related Topics:Best of the BestMarketing
click to Comment(Comment)
Up Next

Change in the Management and New Creative Direction at CAZAL