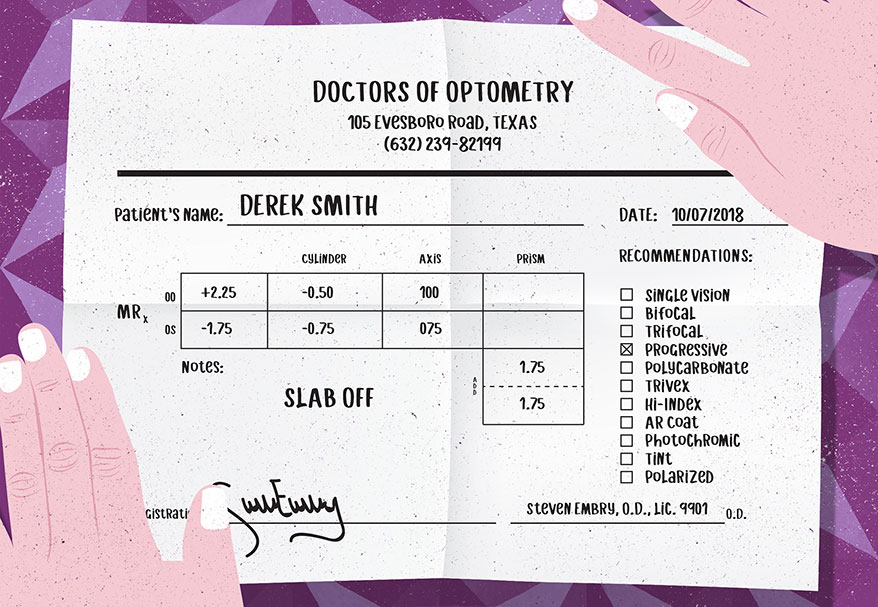 KATE, AN OPTICIAN, and Mark, an optometrist, were partners with a practice in a trendy hamlet outside Atlanta. Mark’s undergrad college roommate Derek recently moved to town and he was invited in to see the office.

“Kate, this is Derek,” said Mark. “He was interested in looking at glasses.”

Derek grabbed Kate’s hand and pumped it enthusiastically. “I had an eye exam just before losing my coverage back in Texas but I held off on getting glasses because it usually takes me a few tries before they work,” he explained. “I have the prescription here,” he said, fumbling for his wallet.

“Kate’s the best!” Mark gushed, playfully punching her in the bicep before grabbing his friends’ shoulders. “Let’s find you an awesome frame.”

“What is your occupation, Derek?” asked Kate, unfolding the script.

“I’m in marketing and advertising,” he replied.

“He’s being modest, Kate,” said Mark. “He owns his own firm.” Mark leaned over and whispered: “He’ll be a great referral source for us!” Kate nodded her understanding, then stepped back as a tech came to retrieve Mark for his next patient. The two friends gave their goodbyes and Kate invited Derek to sit at the dispensing desk.

Kate smoothed out the prescription on the table to examine it. “So, Derek, have you worn progressive lenses before?” she asked.

“I don’t think so, I just have these,” he said, pulling his glasses off his face and handing them to her. She examined them quickly—single vision. “They’re about four years old,” he continued. “I know I’ve needed to update them for a while.”

“And are you having any double vision when you read?” she asked.

“Double vision? No, I don’t think so,” he said. “I just don’t want to keep taking my glasses on and off. It makes me feel like an old man!”

At the end of the day, Mark joined Kate in the optical lab to review Derek’s order.

“The prescribing doctor made a note to include slab off,” Kate began. “It’s his first progressive; never had slab off. I want to make this without and see how he does.”

Mark arched an eyebrow. “This doc in Texas prescribed slab off. You’d consider ignoring it?”

“Of course,” replied Kate. “It’s not a part of the prescription; it’s a suggestion. I’m the optician, so I have to do what I think will work.”

“It doesn’t matter what they say, I don’t want to give this guy slab-off until I know a regular progressive won’t work,” insisted Kate.

“Are you going to dispense and do all the follow-up work when he hates them?” said Kate.

1. The prescribing doctor has the final say on using slab off. If the optician went without it and the patient went back to the doctor for a re-check and finds out it wasn’t put on, the optician will have to answer to the doctor!
2. Kate is obligated to disclose to Derek they are business partners, and not following the prescribed Rx could potentially be a liability if the patient has an accident or problems.
3. Yes, the additional expense should be waived; it’s part of business to take care of the patients.

While the slab off will address the vertical imbalance, there is no correction for anisometropia. Correcting image size with base curves will address both image size and vertical imbalance. Calling the prescribing doctor and requesting no slab off with base curve changes would be the correct way to address this patient’s problem. The optician is financially responsible for remakes and therefore should be allowed to do whatever it takes to correct the patient’s problem, yet consulting with the prescribing doctor will keep all parties involved happy.

Before making the new Rx I would first have Derek put on his glasses, have him tilt his head back and look through the bottom of his glasses at a near target letter and ask if he noticed any vertical diplopia. In addition, I would set up the new near Rx in a trial frame and do the same thing. If he notices any vertical double vision in either test, slab off is needed. If he does not, no slab off is needed. Taking the few minutes needed to do these tests would be worthwhile, providing a definitive answer and greatly reducing the need for a remake. The doctor should do the tests; he is the person to have the final say.

I think it is a lens attribute — therefore it would be an optician decision. If the lenses are not working, generally labs will give you 60 days to make changes without charging the full lens amount again.

Call the prescribing doctor. If it was written on the Rx it is prescribed.

No slab off — try it as a regular progressive. If it doesn’t work, remake with slab off.

In our practice, we take the view that when a patient moves/crosses state lines, that he now becomes our responsibility whether or not he is using our prescription or an out-of-state prescription. As “partners,” there should already be an understanding between Mark and Kate for issues like these before they crop up. As for the slab off, I don’t like to do them on PALs. It’s not that it won’t work, I just hate to put a line on a line-less product. Instead, I have my lab eliminate some of the equalizing prism on one lens to reduce the amount of vertical imbalance. Even though it doesn’t eliminate all the imbalance, it reduces it enough to keep the patient from experiencing double vision. In our state, it is considered a recommendation and I would not tell the patient one way or the other. It’s an easy calculation for the lab to do.

With progressives, the bigger concern than a prism imbalance at near is image size differential. I would not slab a progressive unless I had a complaint from the client that they were getting diplopia at near in their progressive. The average person can adapt to a considerable prism imbalance. I would however choose the base curve and thickness so that image sizes between both lenses were closer to agreement. The optician is the final say on how the lens is manufactured. The doctor can suggest a certain brand of progressive, but it’s up to the optician and the client to decide which is best for them. I would explain to the client what slab off is, and that in this case I would not recommend that option, but if he experiences double vision when reading we may have to remake the lenses. This would be covered under most labs’ one-time remake policy, so I would waive any fees and not pass them on to the client.

The optician should confer with the prescribing doctor to determine the purpose of the prescribed slab-off prism. If they concur that the prism may not be necessary, then the optician could try that route.
If Kate gets her way, she should definitely divulge that information to the patient to keep him informed. This will also avoid having to backtrack.
If Mark wins the debate and the slab-off prism is necessary, the extra fee should be waived. This person could bring many referrals to the business.

First off, I would never outright ignore any element of a prescription written down on that legal piece of paper signed by the prescribing doctor. I would make a phone call to the prescribing doctor to discuss the slab off and see what his/her thought processes were when the slab off was prescribed. Depending on what transpires, I would always discuss with the patient the situation and explain that Dr. X prescribed “slab off” because he/she thinks it is best for said patient, and if it does not work we will re-evaluate the need for slab off with the patient and the prescribing doctor. Usually the lab will comp one redo, so that should not be an issue. It is important to be transparent when dealing with patients/consumers! Not disclosing information to patients can bite you in the butt.

Since they are partners there should be some dialogue about the slab off, but Kate should have the final say. After all, opticians deal with the aftereffects, not the doctors. And if Derek has dealt with this difference in Rx all his life, then going without the slab off is the right call.
She definitely needs to be upfront about the decision, but should offer a full explanation as to why she made it in the first place.
Waived or refunded? We require payment up front, so it wouldn’t be waived. If Derek wanted to try the slab off, and it didn’t work, I’d explain we’d remake the lenses at no charge.

Call the doctor and tell him your view, and see what he says.
Yes,if you tell the patient up front what you are doing to save him some money and it fails, then the do-over should only be the cost of the slab off and not the rest of the job.

The doctor has the final say. The optician is incorrect; the instructions are part of the prescription, just as an OMD would write how often to take a medication.
I would think so, because if it doesn’t work out without, and she has to put it in later, the patient may find out the prescription wasn’t followed and that’s a death knell for the practice.
Why not call the doctor who gave the Rx and discuss the matter? Did he absolutely want slab off, or is that just a suggestion? This way, the optician can explain what the complexity with a multifocal is and what they MAY need to do for the format to work.

Any experienced optician will question a doctor’s Rx, whether it be a huge change in cylinder, missing prism, or slab off suggestion. The slab off here was a suggestion and it sounds like Kate has enough experience to know that it probably isn’t warranted. I don’t think it’s necessary to inform the patient—it may be more confusing than informative. A redo isn’t going to happen—I’m confident with Kate’s judgment.

If it is on the prescription it should be filled as written.

If an optometrist orders a slab off you should make it according to the script. At least she should call the doctor and talk to him about the script instead of just dismissing the slab off. Never assume the patient is going to have problems.

A Difficult Teenager, Absent Parents and Unacceptable Behavior … Kick the Kid Out or No?

A Customer Breaks a Pair of Frames While Showrooming … and Just Walks Out! What’s a Novice Sales Associate to Do?

No Need for I.D. with These 9 Sun Styles Putting Their Logos Front and Center