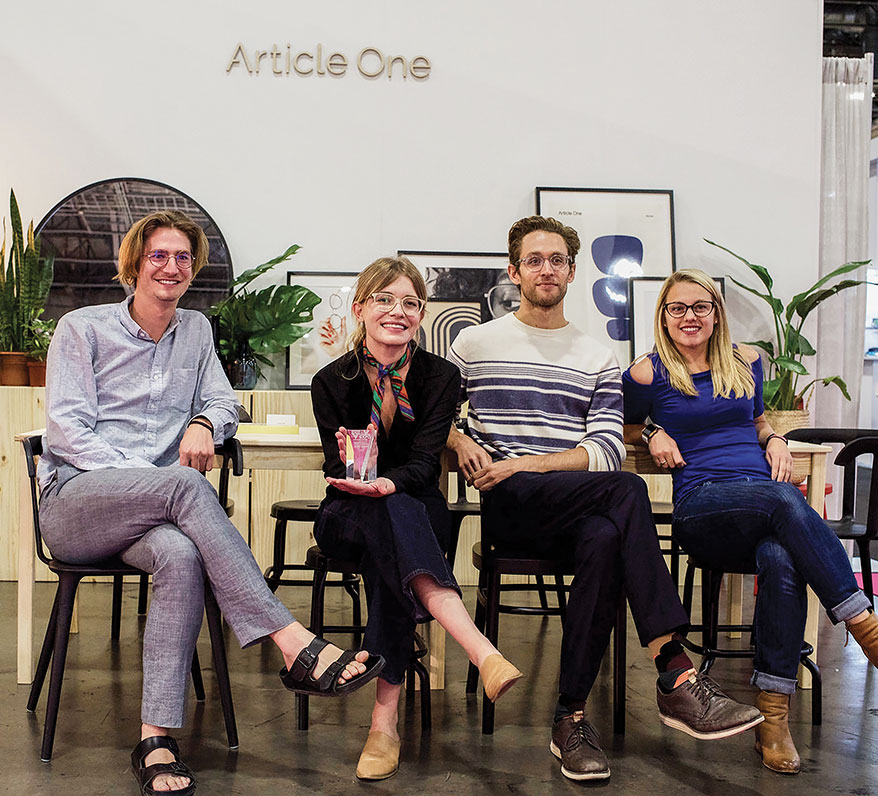 Article One was honored for most creative booth design at Vision Expo West.

Vision Expo announced winners in several categories at Vision Expo West. Those include the 2017 Vision Choice Award recipients: First place went to Lunette USA, second to FGX International and third to Miraflex. Winning booths were voted on by attendees, who cast ballots for their favorite exhibitor in two categories: “most creative booth design” and “best use of technology.” Article One (shown) won the former and Kuusoft Software Corp. the latter. Both received $1,000 in credits to use towards future Vision Expo shows. visionexpo.com

A study conducted by the University of Southern California Center for Body Computing and VSP Global using a prototype of VSP’s Level smart glasses found interaction with social networks and use of digital coaches via a smartphone app connected to a biometric sensor embedded in the eyeglasses provided incentive for users to increase activity. Researchers found study participants were motivated by digital coaching using text message prompts sent at pre-determined times to encourage daily step goals. Juniper Research has identified smart glasses as the highest growth sector of the consumer wearables segment over the next five years, reaching 11 percent of the overall wearables market by 2021. uscbodycomputing.org

National Vision is now accepting entries for its 2017-2018 grant program. Inspired by Simon Sinek’s TED Talk on “Start With Why,” National Vision is asking students to share why they chose optometry school and what their mission as an OD will be for the chance to win a $5,000 grand prize. Open to third- or fourth-year optometry students in the U.S., questions and submissions should be sent to [email protected] by Jan. 31, 2018. The winners will be announced before March 1, 2018. nationalvision.com

A new study commissioned by CooperVision reveals that while the use of digital device screens may pose vision challenges, only a few U.S. ECPs are talking about it. Only 6 percent of U.S. consumers reported that they had spoken with an ECP regarding concerns about screen time, but 64 percent of contact lens wearers and 60 percent of glasses wearers reported they would be very interested or somewhat interested in exploring ways to reduce eye strain with their ECP. The study was conducted among 1,129 U.S. adults (18+). More from the study can be found online. coopervision.com

L’amy Suits Up With Canali

L’Amy America has signed a license agreement with Canali for a luxury collection of sunglasses and ophthalmic frames. Synonymous with tailor-made Italian luxury and men’s elegance, the new Canali sunglass and ophthalmic collections will preview at the Mido in 2018. Supported by a host of point-of-purchase materials including displays, lifestyle imagery, and product packaging, the Canali eyewear collection will be available around the globe in March 2018. lamyamerica.com

13 Tortoiseshell Frames That Win the Race