This Cleveland-area business has built a name as a high-end optical while still maintaining a diverse range of price points and products.

IN 2009 KEVIN KRETCH took a job at a Lenscrafters, and the constant customer complaints — some about the store but mostly about nearby opticals — were an education. The grumbles mainly concerned poor service, high prices, not taking insurance, or faulty prescriptions. Kretch listened and learned, eventually raising his service game to the point where he ranked among the company’s top five salespeople in the U.S. But he realized he needed something more. If he was going to escape the corporate structure, he needed new skills. “I spent the next year dedicating myself to becoming the best optician I could be. I developed an understanding of the physics and optics of lenses in ways that most don’t understand. I completed a two-year associate’s degree in optical technology, and I diligently researched every frame, lens and equipment company I could find. Then, I felt I was finally ready.”

Before opening Eyes on Chagrin in 2012, Kevin Kretch spent a year developing himself as an optician, studying the physics and optics of lenses, researching the business and completing a degree in optical technology.

Kretch’s plan was to work as an optician at his father’s store. But his dad’s practice is 95 percent insurance driven, and by this time Kretch had developed a fascination for high fashion frames and high tech lenses. “I realized I couldn’t reach my full potential there and that I would be a better fit somewhere else.” He struck out on his own and Eyes on Chagrin opened in Cleveland’s eastern suburbs in late 2012. “I still consider my father to be my partner as he really helped me get where I am today,” he says.

Kretch characterizes the customer experience at Eyes on Chagrin as, “We do the shopping for you.” As in a boutique jewelry store, the product is not laying out for the customer to just pick up and try. The optical features two distinct seating areas, one decked out with comfy chairs and couches, the other dominated by two bars with stools, closer to the frames. “In either area, a customer can relax and enjoy a cup of coffee, a soft drink or even a cocktail while we ask a series of open-ended questions, from which we get an understanding of the patients’ needs so we can turn our 3,000-frame inventory into a 10-12 frame selection created specifically for them,” he says.

Constantly thinking of efficient ways to “re-invest” in his business and brand, Kretch makes a major purchase annually aimed at ensuring long-term success. “One year it was my remodel, the next it was a newer and faster edger, the next it was creating a second doctor’s lane with the latest digital refracting technology.”

Eyes on Chagrin has made a name for itself as a high-end optical, but offers frames at all price points.

Kretch lays claim to “the world’s greatest staff,” adding that it took him a long time to pull them together. He considers morale crucial and maintains it by supporting staff in the store and out, whether it’s by sponsoring his receptionist’s son’s baseball team, throwing a monthly party, or simply dispensing a “Great job!” now and again.

Each employee has a primary responsibility that is theirs alone (ordering lenses, submitting claims, preparing patient files, monitoring returns/credits, etc.), but they are also required to support another employee’s primary as a secondary responsibility. “This not only guarantees efficiency and reduces oversight, but also ensures that operations still move methodically in the temporary or permanent absence of an employee.”

Eyes on Chagrin made its name as a high-end optical, but Kretch makes a point of stocking price points affordable to all. The question was how to convey that to the customer. The solution came in the form of a fantastic closeout distributor from whom he purchased hundreds of frames. “I now have a section in my store that is always 50 percent off the frame and lens as well as a selection of $99 completes.”

To Kretch, the customer experience doesn’t end at dispense. “It isn’t completed until a thank you note or follow-up text is sent, ensuring that we have done our job to the best of our abilities.”

Like the rest of the industry, Eyes on Chagrin is navigating a new normal. When COVID hit, the business was categorized as essential by the state of Ohio but Kretch felt he wasn’t yet in a position to guarantee a safe environment. “At that point you couldn’t find hand sanitizer, masks, gloves or Clorox, so how could I stay open? We closed to the public but had one employee here most days to answer phones, take orders, ship out glasses and contacts. About three weeks later, after I had all my PPE and my new COVID procedures written and implemented, we reopened slowly, starting with two employees at a time.” After the first week they were busier than they could have imagined. Over a month’s worth of canceled bookings were rescheduled into the following month and the practice is still booked six weeks out — and minus three full-time employees who never returned. “It’s been pure craziness,” he says. 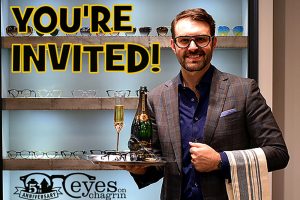 1. ALL DIGITAL. At EOC, postcards and paper charts are a thing of the past with cloud software being brought in and employees encouraged to send texts to customers with reminders, updates, follow-ups and even new frames they may like.

2. TEAMING UP. Kretch loves to form partnerships with local shops. At J3, a men’s clothing store down the street, he has installed a small sunglass “shop in shop”: [email protected] Customers are directed to EOC for an adjustment and profits are split with the clothing store owner.

3. GIVING BACK. Kretch likes to give back to the community where he can, including donating products and gift cards to silent auctions for local schools and organizations.

4. POP IN. The store is occasionally made available after hours to small biz owners that want to have their own pop-up shop “parties.” “I call them Tupperware parties but they’re mostly people who make and sell their own jewelry, beauty products, or things of that nature,” says Kretch

5. IN THE CARDS. To get an idea of Kretch’s belief in the power of word of mouth, consider his business cards. “I spent thousands on design and about 10 times more money per card than my last. I wanted someone to comment on the card every time we hand one out. The sheer weight and thickness of the card is enough to gain a reaction.”

Related Topics:eyecare businesses in OhioFeatured
click to Comment(Comment)
Up Next