Cream of the Crop

WHAT IS NOW ZIEGLER Leffingwell Eyecare began life in 1981 in Milwaukee, WI, as a small, two-day-a-week office purchased from a retiring OD. In 1983, Dr. Dave Ziegler moved the office to a new location with one employee. Over time the staff doubled in that building until the business moved to a larger space in 1996 and added Dr. Chap Leffingwell as a partner. After years of growth, Ziegler’s daughter Dr. Kristen Ziegler joined part time in 2015. Two years later the practice relocated to a new standalone building.

The present location is in New Berlin, a middle-class suburb of Milwaukee. According to Ziegler Sr., the optical was designed around high-end brands not well known to the average consumer. “This gives us the opportunity to tell brand stories about the quality eyewear we display. This selection also differentiates us from the competition, since the brands we carry are rarely found in the state.” 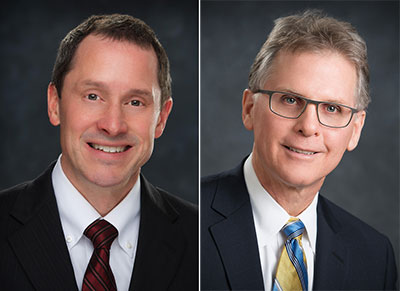 Dr. Dave Ziegler, left, bought the practice from a retiring OD in 1981. Dr. Chap Leffingwell, right, joined as a partner in 1996.

Inspiration was found in Nordstrom and the Apple Store. “We wanted a large, open space to separate our brands with what we call ‘white space,’ he says. “This gives the patient the opportunity to process what our optical staff has told them about … a particular frame … They can then leave that area, browse around and engage with another brand.”

Custom-made cherry communal tables encourage movement throughout the space, with frame trays recessed into tabletops to keep things orderly, and risers at the ends of the tables drawing interest to collections. Shelving and recessed cubbies abound; pegs are banished. LUM lighting ensures the frames’ design features and color are displayed to best effect. EyeDesigns helped the practice develop a consistent aesthetic.

The retail and reception spaces overlap, changing up floor textures, colors and materials to create interest. Ziegler has strict rules for the concierge desk: “No clutter… Just a couple of Macs, a phone, a credit-card processing pad, and two welcoming faces. I’m a minimalist.” The silent phone is for internal use only; incoming calls go to the back office.

Some of Ziegler Leffingwell’s staff have been with the practice for over 30 years; Ziegler credits its carefully crafted culture of mutual respect. Management comes up with “purposeful agendas” to provide a platform for discussion at monthly staff meetings. “We’re constantly searching for ways to improve the patient experience while learning from our failures,” says Ziegler, who believes it’s important that this process begin with the doctor or owner. “It is crucial to make the investment in the leadership skills necessary to build your own culture of excellence,” he says.

The medical experience at Ziegler Leffingwell is underpinned by a simple idea: “We help patients understand the different solutions to their vision problems so they feel included in the process and feel confident with our treatment plans. The most important document we have is the blank pad of paper with our practice logo in our exam room. This is where we write our recommendations and explain everything from lens options to ocular diseases. Hand-written explanations in easy-to-understand language show the patient you care enough to make sure they fully understand. It’s not uncommon for patients to bring in those notes years later.”

All patients are pre-registered by intake staff, and pretest suites have glass walls for an open feel. The concierge desk staff have a view of these rooms, improving patient flow. The six exam rooms are named for Milwaukee landmarks, which are depicted on their walls in specially created murals. “The themed exam rooms are the most talked about feature by our patients,” Ziegler says.

Disliking the way typical dispensing tables force staff and customer apart, the practice added two cafe tables and asked sales staff to sit alongside the patient instead of across from them. Ziegler says this creates a collaborative approach. “It’s like meeting your friend at the local coffee shop.” Rounding off the experience, a show is made of dispensing. The eyewear is brought out on a leather tray in branded cloth shopping bags containing a case with the patient’s name embossed on it, a customized portfolio explaining the eyewear features, and a piece of Ghirardelli or Lindt chocolate.

Ziegler Leffingwell’s success reflects its constant search for ways to personalize the patient experience. “We look for ways to connect with patients and treat them like family,” Ziegler says.

2. KIDS’ STUFF. The “jungle play room” for young patients has a starlit ceiling, dragonfly lights, Brio train set and lots of other toys. All kids get an ice cream cone Rx after their exam.

3. TAKE YOUR PICK. An online curated selection of glasses shows the staff’s faves for five different fashion personalities. Patients can preselect their favorites, which will be ready for viewing at exam time.

4. FIVE-STAR SERVICE. Dr. Ziegler got the idea for the practice’s concierge-style reception space while strolling through a hotel lobby in San Francisco.

5. GLAD YOU ASKED… Sales staff have flashcards for each frame brand with three talking points (memorized, ideally) about that brand.

Among their selection of independent brands is Ziegler Leffingwell’s private label — Soul, manufactured by SHO Eyewear — which helps fund a clinic they’re building in Haiti with Mission of Hope Haiti. From every purchase, $40 is donated. The goal, says Ziegler, “is for the Haitian technicians … to do the refractions with a SV-1 handheld autorefractor … upload the data to the cloud using Revolution EHR… A group of ECPs in the U.S. review the refractions and enter an Rx to meet Haiti’s requirements. This triggers our supply chain through Essilor labs to send them uncut lenses, which are edged onsite.” He is also showing them how to make a small profit on each transaction so they can be self-sustaining.

Related Topics:eyecare businesses in WisconsinFeaturedZiegler Leffingwell Eyecare
click to Comment(Comment)
Up Next

Want to Know What ‘Start-to-Finish’ Service Really Looks Like?

This Ontario OD Is Off to a Flying Start