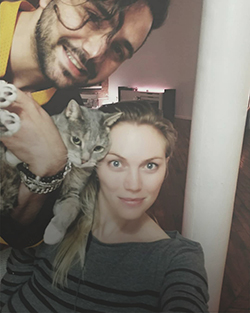 W hen Alissa and Christos Karabelas opened SOMA in Boston’s South End in 2019 it was, in a way, a logical step in a process that had seen them, individually and collectively, nurture a set of skills and passions encompassing photography, fashion, frame styling, graphic design, opticianry, retail bookkeeping and much more. But for Christos, it was also the culmination of a “decade-long journey to find my place and purpose.”

In the preceding years, Christos, aside from forays into the clothing trade, videography and eyeglass fabrication, had obtained an ophthalmic dispensing degree. Along the way he met Alissa, a model with a double degree in finance and accounting who would soon add to those qualifications frame styling and experience as an optical receptionist. They had the vision and the skills — all that was left to do was to execute and open their dream optical. Two years ago, newly married, they moved to Boston determined to do just that. “We just knew we had to make it work,” says Christos. 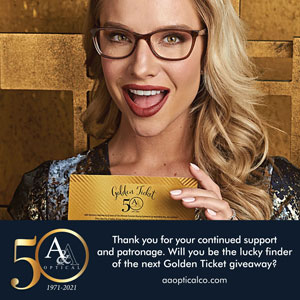 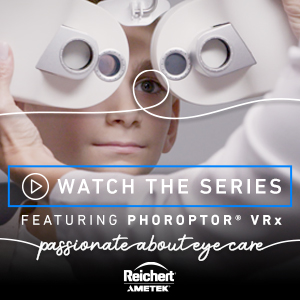 The couple has family in Boston but were new to the South End, an area populated largely by families and young professionals, and also very LGBTQ-friendly. And of course, as a world-class educational hub, the city has a lively, intellectual vibe. “We are humbled every day by the people who walk through our door,” he says.

The build-out took six weeks. “I personally didn’t expect [it] to be so grueling,” says Alissa. “We knew what had to be done but had to act swiftly to start capturing business before summer.” A lot of sourcing was done online but a few special pieces were ordered custom, such as the store’s neon light, which was handcrafted by an artisan in Philadelphia. They also managed a full bathroom restoration as well as tearing out a bar, building an island, and repainting everything, not to mention getting everything into inventory. “About 40 collections equals a lot of frames — my goodness,” recalls Alissa. But in the end, according to Christos, “It was amazing to see everything come together so quickly.

There were a lot of moving parts, but somehow we nailed the timing perfectly, which really surprised us because neither one of us had opened a store.”

The result is a true gem of an optical. SOMA has a mid-century modern aesthetic whose “touch of Palm Springs,” as Christos puts it, is brought out nicely in juxtaposition with the building’s “Old Boston bones.” Super-high windows help to illuminate exposed beams and the refurbished map drawers that are used to store and display frames. White is predominant, with most surfaces topped in quartz. “It was important to us that our shop not feel like your typical optical,” says Christos. The space is devoid of frame racks, POP or any of the other usual suspects. Every now and then, somebody strolls in thinking they’re in an art gallery. “We really love using negative space to draw emphasis to the individual frame or collection.”

“Glasses are not just a widget to us,” he says. SOMA only carries independent designers and maintains personal relationships with them all. Christos himself spent four years learning to make glasses out of wood, and (while he now acknowledges that’s probably not the ideal material), it remains a goal to start his own label. Another is expanding SOMA’s fledgling online sales platform. The store’s online presence has grown rapidly, with the couple producing their own content. Graphic design for marketing materials as well as branded items such as cleaning cloths is handled by Christos. (See “Fine Story.”)

Their top-selling frame is the Brain Drain by South Korean brand Highcollar. In terms of lenses, their favorite digital single vision is the IOT Endless; for lifelong contact lens wearers they go with the Varilux X. “For hyperopes, we love the Seiko Surmount or Autograph Intelligence. We are also very excited to offer the new IOT EVOlens,” says Christos, adding a “mega shout out to Cherry Optical.”

Ad campaigns, however, aren’t really SOMA’s thing, with word of mouth being the preferred driver (though they believe everyone should invest in Google ads). “Marketing has always felt a little foreign and manipulative to us, so we decided to grow slowly and organically… If you do a really, really good job, people tend to tell their friends.” 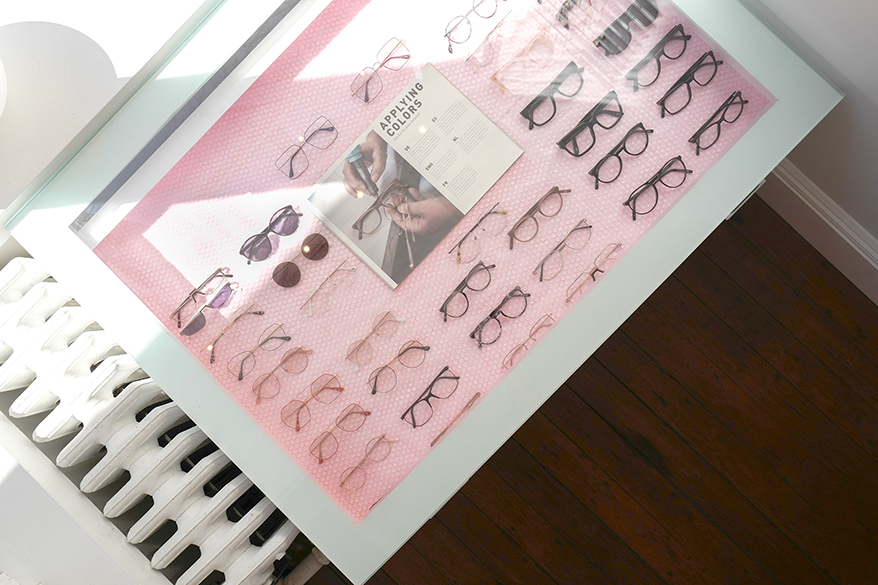 Like many in the industry, SOMA has found at least one silver lining in COVID. “We moved to by-appointment scheduling, which we’ve continued for patients who want a private showing,” says Alissa. The new business model has provided an interesting pivot that the couple has enjoyed.

For Christos, opening SOMA was the culmination of at least a decade of dreaming. “It is deeply important and personal to me and is the second-most-important accomplishment of my life — the first being marrying my wife,” he says.

“It is the only place on Earth that I have any control of how things are run, and I use that as my tiny platform for changing the world, one eyeglass sale at a time.” 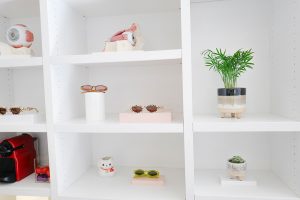 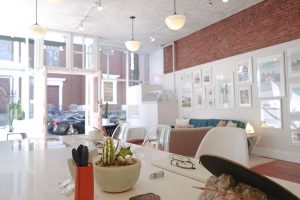 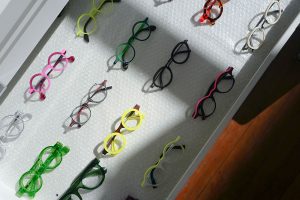 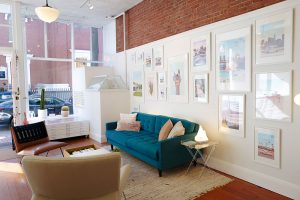 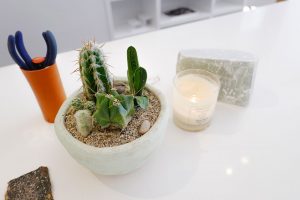 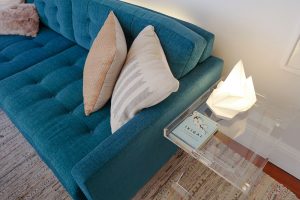 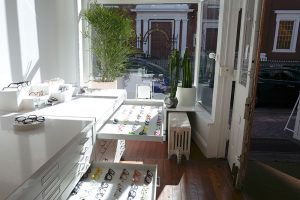 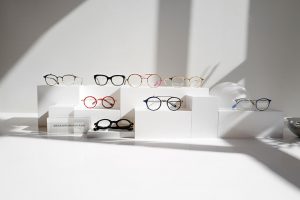 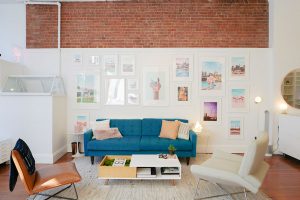 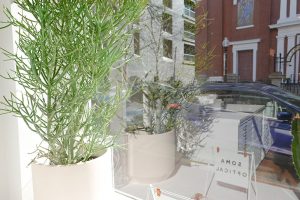 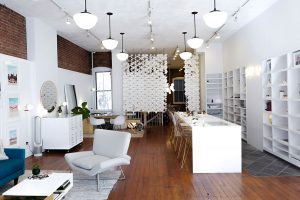 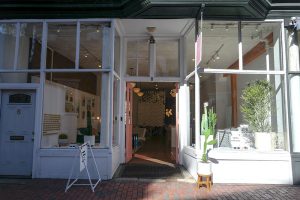 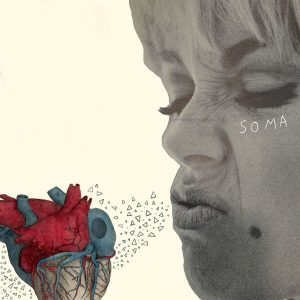 2. ART HOUSE. SOMA hosts local artist pop-ups; details of some of these can be viewed on the optical’s blog (invisionmag.com/072101).

3. OFF THE WALL. Part of a wall in the optical features a Paul Fuentes gallery; one of the artist’s prints of a llama wearing sunglasses claims a place of pride.

4. IDEAS FACTORY. WChristos and Alissa have a supportive and creative following that independently make a lot of content for SOMA’s online presence.

Christos handles all of SOMA’s graphic design needs himself. “Some of it is stuff that I designed for other projects that got passed over but I always liked. Some stuff is a result of a day off doodling and making collages. I like to play with psychedelic imagery; there’s something fun about twisting the concept of vision away from the literal interpretation usually associated with optical and viewing it through the lens of psychedelia. You can never have too many cacti, mushrooms and swirls of color. I like to keep things light and playful, so I shy away from the serious stuff,” he says. “As for inspiration, I kind of pick it up from all over the place. I like a lot of older stuff. I like texture. I like minimalism. Anything from the ’70s but cleaned up and modernized.”

Related Topics:eyecare businesses in MassachusettsFeatured
click to Comment(Comment)
Next Part

🦸 Opticians Are Your Optical Selling Superheroes

🏆 Save time, increase capture rate, maximize your EHR data and website with a seamless optical eCommerce plug-in that keeps patients buying from YOU 🎯 Now through August 31st when you complete a 15 min demo receive a $45 Target® gift card. Book your demo here.